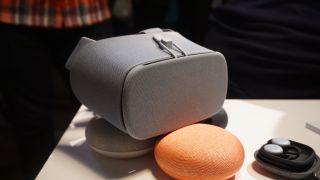 When Google first announced the Daydream platform it enthusiastically promised a number of headsets from hardware partners, but to date we've only actually seen two such devices - the original Daydream View and the recently unveiled successor, both made by Google itself.

Where are all the third-party devices? Well, if Federal Communications Commission filings can be believed - and they usually can - there's a standalone Lenovo headset on the way called the Lenovo Mirage Solo with Daydream, as LetsGoDigital reports.

The filings don't reveal too much about the device, except its name and the fact it's got a 4,000 mAh battery installed - unlike Google's Daydream View devices, the Lenovo headset will come with all the necessary components installed, so you don't need to slot in a phone to start exploring virtual reality.

The Mirage Solo comes with a wireless controller too, for pointing at and interacting with things in a VR space, but we haven't got any tasty details like the speed of the processor or your field of view. Chances are it won't be too long before Lenovo and Google make the headset official, which could even happen during January's CES 2018 conference.

The trend right now is certainly for fitting everything into one unit so you can leave your phone in your pocket: both the HTC Vive Focus and the Oculus Go are expected to hit the market within the next few months, offering VR on the cheap for those who don't want to shell out for a full-fat headset and a gaming PC.