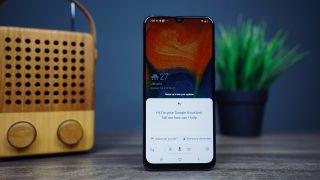 It seems Amazon isn’t the only company who hires people to eavesdrop on conversations you have with your voice assistant – Google has now been caught out doing the same thing, too.

Belgian broadcaster VRT NWS has reported that Google hires contractors to listen and transcribe audio recordings of users talking to Google Assistant, either via a smart speaker or their phones.

One such contractor provided the broadcaster with over 1,000 recordings for an investigation into the transcription process. It was found that many of the recordings included identifiable personal details of users, while 153 conversations were seemingly recorded by accident, as the wake command of “OK Google” or “Hey Google” wasn’t used to trigger the digital assistant.

According to the report, Google employs thousands of contractors around the world to transcribe Assistant conversations, although they all use a secure login to access the recordings via the company’s Crowdsource app.

You can watch the original report, with English subtitles, in the video below.

Although it's no secret Google collects user data and stores recorded conversations with Assistant, the company has not previously disclosed the fact that humans also listen to some of these interactions.

After VRT NWS broke the news, Google published a blog post defending the practice, stating that the system is necessary to learn more about user behavior and to improve Assistant’s algorithms and customer experience. Hiring people from around the world means the company’s “speech technology works for a wide variety of languages, accents and dialects”, thus “[enabling] products like the Google Assistant to understand your request, whether you’re speaking English or Hindi”.

According to Google, contractors listen to only 0.2% of all audio clips and none are “associated with user accounts”. Moreover, transcribers are instructed “not to transcribe background conversations or other noises, and only to transcribe snippets that are directed to Google”.

Google also says there are “a number of protections in place to prevent false accepts from occurring”, which is when Assistant is triggered accidentally by “some noise or words in the background”.

A contractor leaking audio clips to a news outlet, Google says, is a violation of its data security policies. The incident is being investigated by the company, and it says action will be taken against the leaker. Google is also reviewing the policies it has in place for its transcribers “to prevent misconduct like this from happening again”.