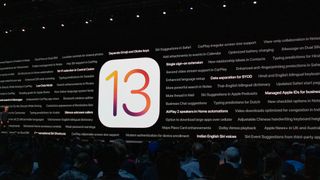 Apple’s iOS 13 update introduced plenty of long-awaited features, but along with Dark Mode and other improvements comes the inevitable iOS 13 problems, bugs and other issues that spring up alongside big software changes.

Some of these are iOS 13 bugs are minorly annoying, while others seriously interrupt features or even parts of the user interface. If you’ve run into problems, chances are someone else has, too - and we’ll try to list each and every one.

We'll list every issue we can find, along with workarounds in the meantime while Apple works on a fix. Sometimes, these bugs are small enough that Apple waits until a future version of iOS 13 to solve; but sometimes they’re so disruptive that the company rushes out a new version exclusively dedicated to patching out that problem.

iOS 13.1 was one of these updates blitzed out to the public barely a week after iOS 13 proper had launched, so if you’re experiencing issues, they might have already been solved. If that’s the case, the process to update to a later version of iOS is simple: head to Settings > General > Software Update.

Read on for what we’ve found - and if you have been experiencing an issue that hasn’t been fixed, keep checking back for updates about workarounds and possible fixes.

Apple rushed out iOS 13.1 a week ahead of schedule, and one of the big fixes was for issues with its first-party Mail app. Was it messing up email counts? Leaving out sender or sendee addresses? Duplicating notifications? Or simply not downloading email? Upgrade to the latest version of iOS 13 to fix this issue.

If your issues pertain to other email apps not feeding correctly to or from the Mail app, make sure you’re using the latest versions of those apps. If you’re still not getting your mail, try fiddling with your data fetching settings in Settings > Passwords & Accounts > Fetch New Data.

iOS 13 overhauled the cross-device Reminders, but users have reported issues like missing reminders and lists to broad syncing issues with notes and contacts. Some might be solved by upgrading to the latest version of iOS - per the system notes, several have supposedly been fixed as of iOS 13.1.2 - but other issues might be more pernicious and require some tinkering.

Apple is aware of these problems, and for the syncing issues, wrote a checklist to troubleshoot issues. It starts by ensuring all your devices are up to date - since upgraded reminders aren’t compatible with earlier versions of iOS and macOS, and you can’t share reminders with users who haven’t upgraded - and moves on to the granular: make sure your date and time settings are correct across devices, are signed into iCloud with the same Apple ID, and keep your data within limits.

iOS 13 brought a couple issues with third-party keyboards, including preventing swapping back to QuickType after using a non-Apple option. There’s also a bit more of an insidious bug which accidentally gave keyboards “full access” to external services, even if you’d set them to run without it - Apple knows about it. In all cases, upgrading to at least iOS 13.1.1 should fix all the above issues.

iPhone failing to restore from backup

Here’s an issue fixed in iOS 13.1.1 - users were apparently prevented from restoring their iPhones from a backup. A further bug continued to show the progress bar for an iCloud Backup after successfully backing up, which was fixed in iOS 13.1.2. Upgrading should fix the issue.