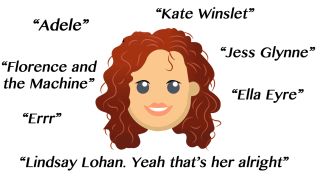 First they came for our phones, but now emojis are popping up all over the place - including Twitter.

In the run up to the Brit Awards, which take place tonight, the social network has been rolling out special emojis featuring some of the stars that will be performing at the show.

Now, emojis are tricky to get right - you don't have a lot of space to work with - and some turn out better than others. We wanted to know how well these ones ended up, so we took to the streets to ask the public at large: can you recognise these emojis?

Some did better than others, as you'll see below.

There were more people convinced that this was Harry Styles than knew that it was actually James Bay. Don't worry, that would have been our first guess too.

A particularly tough one, we thought, but we were surprised how many people correctly guessed this is Justin Bieber. Most of the other votes went to US Presidential hopeful Donald Trump who shares the distinguished hairstyle, with London Mayor Boris Johnson getting a couple of shout outs too. To the person who guessed Jason Orange, we don't see any resemblance. Sorry.

It was about a 50/50 split between Adele and Beyonce on this one. The correct answer was Adele, but we can see the Beyonce resemblance.

Winning match? Yes (but only just)

Yup, it's ITV darlings Ant and Dec, the cheekiest of television's chappies. Well done to most people for getting this right, although a few did think it was Dick and Dom.

We threw up this one next just to confuse matters. It's actually Radio 1 hosts Dan and Phil, but only one person came close, with "Those guys from YouTube". Some people changed their mind and decided that these guys were actually Ant and Dec. Those people were wrong.

To the people who guessed The Spice Girls for this one, a private word please. As everybody should know, there were five Spice Girls, not four. Eugh. Not a lot of correct guesses for this one.

Winning match? We think this is one of the better emojis, but it wasn't a winner

Sorry, it's not Lindsay - it's singer/songwriter Jess Glynne. This was a tough one.

Why, it's the Weeknd of course! How could you confuse that hair for anybody else's? Most people nailed it, but no points for the person who guessed "the guy with the hair".

Coldplay was the correct answer, and a few people got it right (although definitely not the guy who said "No way in hell is that Coldplay"). But overall, most people couldn't get it. Maybe it should have included Chris Martin's multicoloured jacket.

This one drew a variety of guesses, but just enough people correctly identified that the beard-and-hat combo belonged to Jack Garratt. No way has Ed Sheeran's beard ever been that big.

What can we learn from these results? Not enough people know their Spice Girls, Ant and Dec are impressively recognisable even in emoji form, and Justin Bieber might want to consider a new hairstyle if he doesn't want his emoji to be confused with Donald Trump.