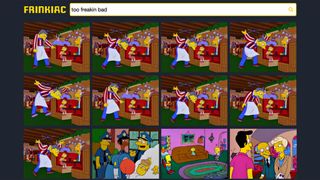 The Simpsons is perhaps the most quotable series in the history of television, providing perfect one-liners for pretty much every conceivable situation since it arrived back in 1989.

In an age where emoji, memes, gifs and other images are considered acceptable responses to online discussions, a search engine which matches Simpsons quotes to images of the scenes from whence they came would prove invaluable in our fight to eradicate language from our conversations entirely.

Well, that is exactly what Sean Schulte, Paul Kehrer and Allie Young have created with Frinkiac, a search engine named after the show’s hilarious quack scientist, Professor Frink.

All ‘kids these days’ jokes aside, it’s an ingenious and fun alternative to Googling for imperfect Simpsons images which provides almost 3 million high-quality Simpsons stills.

Pulling images from the first 15 seasons of The Simpsons (because we all know that absolutely nothing memorable has occurred in the seasons since), Frinkiac finds stills using the indexed subtitles of each episode.

Speaking to Wired, Schulte explained that “the majority of the code was written in about a week, to parse the video files and upload them to the server and index them and search them,” while Young created Frinkiac’s user interface in a matter of weeks.

Screen captures were generated by cutting each scene into 100 equal-size buckets, then matching said buckets by their average colour, then saving a frame if the difference between it and the last saved frame was large enough – this goes a long way to eliminating hundreds of hours worth of unnecessary material, as explained in greater technical detail in a blog post by Kehrer.