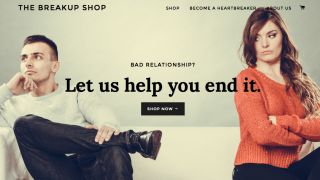 Breaking up with someone is never easy, but would you ever do it through Snapchat? Four people already have claims The Breakup Shop, a new service that offers a variety of ways to end your unwanted relationship.

Set up by brothers Evan and Mackenzie Keast to take some of the pain out of breakups, the service will deliver a personalised message to your ex-lover for a fee, informing them that it's over.

For $29 The Breakup Shop will deliver the news via a phone call, while those with less heart, or cash, can opt for a $10 text or email. And if you really want, you can send a breakup Snapchat to your partner for $5 - which should at least give them the comforting realisation that you're actually a total tool.

All Netflix, no chill

There's also an $80 Breakup Gift Pack that includes a Netflix Gift Card, a sympathy letter, a box of cookies, a couple of wine glasses (just to remind you that you're now alone), and either a copy of Call of Duty: Ghosts or The Notebook. Because nothing says "I'm sorry our love didn't work out" better than the neutralising terrorists or a film about two people in love who end up together.

What's more surprising than this service existing is the number of people who have already used it. MacKenzie Keast told us that over 60 people have already outsourced their breakups to the service.

"These have primarily been text messages, with the second most popular option being phone calls," he said. He also added that there had been four snap breakups so far, but that The Breakup Shop expects it to be a high growth product once it starts advertising to the under-25 market.

Obviously it's difficult to verify how many of these breakups were legitimate and not just friends pulling (rather unkind) pranks on each other. However, considering the prices, it seems a rather expensive way to do it.