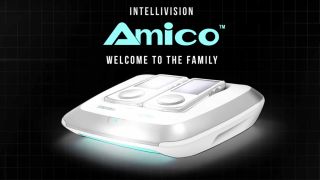 When it comes to home technology, there's nothing quite as diverse as a modern-day video game console. Serving both as an all-inclusive multimedia experience and an angular box for keeping 12-year-olds occupied, the console we know today is far removed from its ancestral heritage. While it's important not to let nostalgia blindside us, sometimes it's hard not to remember a time when mindlessly blowing on cartridges was considered technical wizardry.

As nostalgia for the early days of gaming continues to grip the community, we've begun to see the likes of Nintendo and Sony try and facilitate consumers, satiating their hunger with miniaturised classic consoles – like the NES Classic Mini or PlayStation Classic.

But even the original game industry titans have re-emerged back on the hardware scene, promising core elements of classic gaming infused with modern hardware. 1977’s Atari VCS is seeing a modern update, while its one-time competitor, the Intellivision console, is being reborn as the Intellivision Amico.

With killer titles such as Earthworm Jim featuring on The Intellivision Amico, and a planned launch date in October 2020, will this resurrected console be able to teach the new dogs some old tricks? We spoke to the president of Intellivision Entertainment, Tommy Tallarico, to find out what the Amico could bring to today’s market after such a long time away.

Getting back to local multiplayer

Tallarico is something of a rockstar in the industry, with his influence spanning over various generations of gaming. From Earthworm Jim and Metroid Prime to ambitious musical projects such as Video Games Live – an immersive concert event for classic gaming tunes – Tallarico has an impressive resume to bolster his new position.

On a transatlantic call between Scotland and California, we asked Tallarico what The Amico ultimately aims to achieve.

"The big differentiator [today] is getting families and friends to play together in the same room, which doesn't happen anymore,” says Tallarico. “The idea of the console is to bring everyone together, similar to the way boardgames do. The reality is, your mom isn't playing Super Smash Bros and your Grandfather can't turn the PS4 on..."

While this response might be a little tongue in cheek, it does highlight issues of accessibility of video games. Whether it's because someone can't find the time or is too intimidated to explore the world of gaming, the rapid growth and change in console gaming over the years has arguably alienated a huge group of past and potential gamers.

"I don't mean to come across as putting these consoles down,”, he says. “I am a huge gamer and love everything these companies do, but there are 200 million of those consoles out there, and three billion people are playing on mobile, who don't consider themselves to be gamers.”

“We hope to pick up where the Wii left off, and focus on those ‘non-gamers’."

But what features, inputs, or – most importantly – games will actually be part of the Amico?

Unlike the mystery around the new Atari VCS console revival, Intellivision has been anything but shy when it comes to the features behind their tech. While discussing the innovations the Amico hopes to bring to the table, Tommy detailed some new information about the console's connectivity.

“Our entire system has RFID, which we'll be showing off at E3. It means I can take my Amico controller to your house, tap it on your machine – connecting automatically – and then play all of my games on your system.”

What is RFID? It’s a type of close-range wireless connectivity, which works in a similar way to the likes of Nintendo’s Amiibo figures, or wireless payment through cellular devices – and opens up possibilities for digital titles far beyond the original console.

“My Mom, she likes bowling, right? I want to be able to buy her a bowling pin keychain which holds the new bowling game for Intellivision, with all she has to do is touch it right on the machine and within seconds, she’s playing the game. That’s what it’s all about.”

This is another example of the Amico paying close attention to innovations from big companies like Nintendo, with the likes of their Amiibo figures, but leveraging the technology in new ways. It will certainly be interesting to see how this unconventional form of video game collecting resonates – or doesn’t – with consumers.

Tallarico also touched on the functionality of the Amico’s touch screen controllers, which bare a resemblance to the classic Intellivision joypads, equipped with a directional disc and touch screen in place of the original number pad. While these controllers are far from complex, their capabilities extend beyond what you’d expect from a controller with only a few buttons.

Not only will the disc be used for traditional movement within a game, but also takes on the functionality of a classic button, it makes what seemed like a rather bare looking controller into something with a ridiculous amount of inputs.

While it’s hard to tell what this will be like in practice, Tallarico continued to elaborate on how this might come into play when controlling some familiar arcade games.

“Think about Missile Command, or Centipede. Both of those games had a trackball controller. I challenge you to try and play those games on a PS4 controller, it’s an absolute nightmare. Or on a mobile device, you can put your finger where you want the thing to go, but you can’t really feel anything – it’s not tactile.

“When you hold our controller horizontal, with the screen on the left and the disc on the right, wherever your thumb goes is where the reticule goes. Want to fire a missile? You hit anywhere on the disc and it will fire in that direction.”

Tallarico also let us in on some of the new gameplay experiences that we can come to expect from the Amico. We already know at this point that the Amico wants to involve as many players as possible, but this idea becomes even more intriguing when it comes to expanding the number of players on something that is traditionally single player.

“Imagine we’re playing Missile Command in multiplayer. I'm the player on the bottom, you’re on the top of the screen, maybe a second and third player on the side. Now it becomes a completely different experience. Same with Centipede: what if everyone else in the room is the enemy, and the spider trying to get you? They’re trying to get away from you trying to take them out. Now, this single-player experience is for everybody.”

The return of Earthworm Jim

Anyone following the Intellivision Amico already will know that the console is getting its very own, brand new Earthworm Jim game, created with the franchise’s original development team. The exclusive title will commemorate 25 years of the iconic character – and utilize similar co-op to the other games on the system.

It bodes well for the resurrection of old fan favorites, though for the expected $3-8 pricing for the Amico's games, it doesn’t sound like it will be a fully-fledged AAA release.

“We got the exclusive rights to Earthworm Jim, 25 years after the release of the first game," Tallarico says, "and we’re doing a brand-new game exclusive to the Amico – but with the original team."

He added, “Again, the great thing about all these games is they’re all going to be couch co-op.”

The idea of togetherness in video games is something that has changed dramatically throughout the years, with most video game socialising often taking place over a headset, rather than close enough to have a scrap when you lose against your friend.

If there’s one thing we can say for certain, it’s that the Amico is going to give modernising core elements of classic gaming a good shot, with some throwback controller inputs that may still have a place in the gaming scene today. If nothing else, it may mean some lapsed gamers pick up a controller once again.