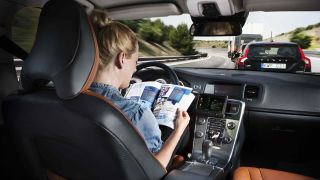 Self-driving cars are poised to take over our roads, and Intel doesn't want to be left in the dust.

For starters, the tech giant announced today a new group within its business dedicated to autonomous driving, called the Automated Driving Group, or ADG.

The group's sole purpose is "innovating the future of driving and designing the next generation of advanced driver assist systems and autonomous driving solutions," according to Intel.

ADG's formation comes after Intel announced earlier this month that it plans to invest more than $250 million over the next two years in autonomous driving, in case you had any question how serious it is about all this.

Intel vet Doug Davis will lead the ADG, while Kathy Winter, formerly a VP at Delphi, comes on as VP and general manager of the Automated Solutions Division. Her resume also includes partaking in the first autonomous vehicle cross-country drive.

The race is on

Intel isn't stopping with a new group and strategic investments: it's also teaming up with Delphi and Mobileye to supply chips for an autonomous driving system.

The system will start off with Core i7 silicon, an Intel spokesperson confirmed to The New York Times, but eventually move on to more powerful chips that will be announced soon.

Rival Nvidia, for one, is a long-time proponent of self-driving cars, and recently unveiled a tiny supercomputer to power them. Qualcomm , meanwhile, isn't shying away from the sector, either.

Intel likely won't develop its own car à la Google, but rather focus on creating smart chips, sensors and other components that will literally help drive autonomous vehicles forward.

Who knows, in the not-so-distant future, you may be strolling through a car lot, trying to decide whether you should buy a self-driving ride with Intel inside. Won't that be a trip?