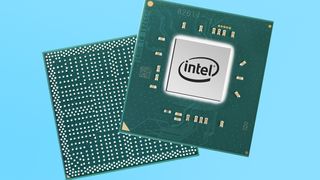 As the first CPUs based on the firm’s ‘Gemini Lake’ architecture (following up on existing ‘Apollo Lake’ offerings) these are new cheap and power-efficient processors for desktop PCs and laptops.

On the desktop side, the chip maker has introduced the Intel Pentium Silver J5005 and Intel Celeron J4105 and J4005.

The Pentium Silver J5005 is a quad-core (four-thread) CPU with a clock speed of up to 2.8GHz, with Intel UHD Graphics 605 (integrated graphics) with a graphics clock speed of 800MHz.

Incidentally, Pentium Silver means that the chip is based on the Atom architecture, a lower-cost (and lower-power) alternative to the main Core series of Intel processors.

A few months ago Intel introduced Pentium Gold, which was based on the company's last generation Kaby Lake offerings. In short, Silver processors aren’t as good as Gold in the performance stakes, but that's reflecting in the savings and lower prices.

The Intel Celeron J4105 is also a quad-core (four-thread) processor with a clock speed of up to 2.5GHz, and Intel UHD Graphics 600 (with a graphics clock speed of 750MHz).

Moving onto the mobile processors aimed at laptops, the Pentium Silver N5000 is a quad-core (four-thread) CPU with a clock speed of up to 2.7GHz, again with Intel UHD Graphics 605 (clocked at 750MHz).

And the Intel Celeron N4100 and N4000 mirror their desktop counterparts, with just slightly slower clock speeds (up to 2.4GHz and 2.6GHz respectively) and with marginally slower integrated graphics (clocked at 700MHz and 650MHz respectively).

Furthermore, the chips offer Gigabit Wi-Fi and will be good for a claimed 10 hours of HD video playback on a notebook with a 35WHr battery.

Intel further noted that Pentium Silver delivers 58% faster productivity performance (based on SYSmark benchmarking) compared to a PC with a four-year-old Pentium processor.

Intel says that we can expect to see notebooks packing these new chips go on sale in the first quarter of next year.