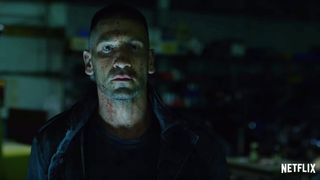 The Punisher is kicking down the door of Hell's Kitchen in an explosive first trailer for Netflix's Daredevil season 2.

Full of Taxi-Driver-esque shots of Josh Bernthal (formerly of AMC's The Walking Dead) looking pissed off as The Punisher, the trailer packs in enough explosions and fights to promise this will be a no-holds-barred brawler of a season.

There's also emotional conflict, tender shots in the pouring rain, guns ,and the moody back streets of the city that we know and love.

Season 2 of Daredevil will hit Netflix on March 18, with a second trailer set to drop on February 25.