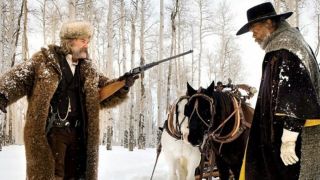 The movie pirates who recently leaked a selection of movies, including Quentin Tarantino's The Hateful Eight, have apologised for their actions.

The group, Hive-CM8, released copies of several movie screeners that had been sent out to judges for award consideration.

Now the group has put out a statement saying it is "sorry for the trouble" it caused, while claiming that the screeners were obtained from "a guy on the street".

The note, which was posted to Reddit and also sent out in the nfo file attached to torrented copies of The Big Short, states that the group "never intended to hurt anyone" and recommends people watch these movies on the big screen as intended.

"The producers need the money from ticket sales to get back the production costs," the group insightfully commented.

The statement makes particular reference to Quentin Tarantino's The Hateful Eight, calling it an "excellent, thrilling and entertaining Western" and an "unforgettable film".

However the group refuse to eat the entire humble pie, adding that it believes its actions have helped create added hype to the movie.

"This will push the cinema tickets sale for sure," says the statement. We're not sure the studios will see it that way.

The group originally announced that it would release 40 pirated movies - making this an unprecedented leak - but now says that it will not release anymore movies before their cinema release date, falling short of the promised total.