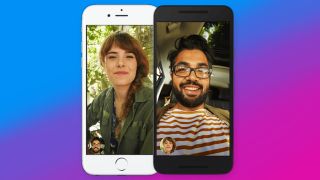 Update: The wait is over. Voice-only calling on Google Duo is now available for users worldwide.

The news was announced by @juberti, technical lead on Duo in a tweet found by The Verge.

Duo, Google's answer to Apple's FaceTime (and more recently, the mobile replacement for Google Hangouts) is getting a new, handy feature that takes the "video" out of "video calling."

Audio calls are coming to Duo, allowing users to stay in touch without having to rely on their phone's camera.

By cutting Duo's dependency on video, callers can now use the app in situations where their hands may not be free to hold a phone up to their face — or if they're just having a really bad hair day.

More importantly, audio-only calling reduces the amount of data a call consumes, making it ideal in low-reception areas or for longer catch-up calls with friends and family where you'd rather not spend the data on both voice and picture.

Unveiled during the tech giant's Google for Brazil event, audio calling on Duo is available now for users in the South American country and is rolling out globally over the course of the next few days.