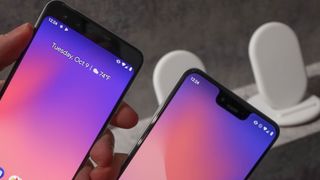 Shared by reliable leaker @OnLeaks, in collaboration with iGeeksBlog, the renders show the front and back of the Pixel 4 in great detail – although apparently all we needed to do to see the Pixel 4's front was look at the Pixel 3.

The renders show a large bezel at the top of the Pixel 4, which houses the top speaker and two front-facing cameras. This is exactly the same layout as in the Pixel 3, although it's possible the exact dimensions (and the camera specs) could be slightly different.

It's worth remembering that unlike the Pixel 3, there is no rear-mounted fingerprint sensor here – we've heard rumors that the Pixel 4 will have facial recognition unlocking, and so this front camera array would be used for that.

One interesting tidbit is that while the Pixel 3 XL had a large notch instead of the large bezel, the renders suggest both the Pixel 4 and 4 XL have the same big top bezel as the Pixel 3. Apparently Google is bucking the trend of smaller and smaller bezels.

Another interesting difference between the devices is that the Pixel 3 has a large chin below the screen, which houses another front-firing speaker. The Pixel 4 render doesn't seem to have one of these, so it could be that the upcoming phone has a weaker loudspeaker array than its predecessor.

Of course, it's worth taking all Pixel 4 leaks and renders from non-Google sources with a pinch of salt, as they're often inaccurate (although @OnLeaks is fairly reputable). So while this should give you a lot to think about regarding the upcoming Google Pixel 4, don't take everything as fact – yet.

We'll know for sure about the Google Pixel 4 in October, when we're expecting Google to launch its upcoming flagship along with an XL version, so stay tuned to TechRadar for our review and news then.