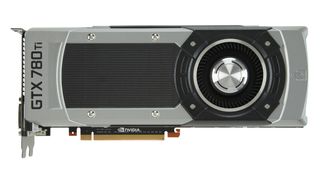 Ever wondered just what goes on in the graphics cards that power your favourite games? If you're a PC gamer, the answer is problably yes. The following article is from The Ultimate PC Building Handbook, published by Future, which contains 180 pages of PC upgrading advice from the experts at PC Format and Maximum PC.

The processing core functions in a similar manner to a PC's processor - it uses clock cycles and cores, and speed is measured in hertz. The specialised demands of this hardware means a graphics processing unit, or GPU, is built in a different way.

The mathematical demands of a GPU mean that high-end graphics cards have more transistors than high-end processors; an Nvidia GeForce GTX 780, for instance, has seven billion, which is more than four times the number included in Intel's Core i7-4770K.

Transistors form stream processors, which function as tiny processing cores. These cores can be used to produce specific parts of images, and graphics cards have hundreds - or at the high end, thousands. The huge numbers help with the intensely parallelised workloads handled by GPUs and, as ever, higher clock speeds mean faster results.

Nvidia and AMD organise hundreds of stream processors into large clusters that aid workload delegation and organisation. Like a desktop CPU, they share caches and memory interfaces.

This refers to the method that wafers - and, therefore, the dies that create graphics cores - are produced. AMD and Nvidia contract external firms such as TSMC and GlobalFoundries to build these, and they're always pushing to build wafers with smaller transistors.

Transistor size is measured in nanometres, and reducing this number has several advantages. If transistors are smaller, more can be packed into a graphics card's die - which means more raw processing horsepower.

It's a constant challenge to produce smaller transistors consistently. Current GPUs use 28nm dies, and there's no firm date for a jump to 20nm.

Graphics cards are powerful enough that they need dedicated memory - and, as usual, the more and the faster the better. It's used to temporarily store the data thats been generated by the graphics card before it's used to render frames on-screen.

Current graphics cards use GDDR5 memory, which is based on the DDR3 memory used in desktop PCs and laptops. Graphics memory is configured differently to DDR3, with higher bandwidth at the expense of latency in order to handle consistent, large amounts of data - a challenge encountered by graphics cards.

Even the cheapest GPU will be accompanied by 2GB of GDDR5, but that's the bare minimum for playing top-tier games. Mid-range cards are now often sold with 3GB or 4GB, and top-end cards sometimes have more.

Make sure a new graphics card has enough memory and at a high enough speed to last the course, because it can't be upgraded, unlike RAM inside a desktop PC.