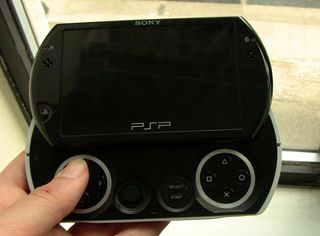 Will the PSPgo's slider form factor design mutate into a proper Android mobile phone with PlayStation-branding soon? Rumour has it...

Rumours that Sony Ericsson is planning to release a Android PSP phone later in 2010 have the games industry hoping next week's GamesCom event in Cologne in Germany or the annual Tokyo Game Show in Japan later next month will bring more concrete news.

TechRadar polled a number of developers, developer trade association reps, PlayStation mag editors and games industry analysts to find out what the initial response to the latest speculation about a PlayStation-branded Android phone is.

We should be clear that this is still to be filed under 'rumour' right now, until we receive official confirmation from Sony and/or Sony Ericsson.

A PlayStation rep served us with a 'no comment' earlier today, with a similar response coming from Sony Ericsson.

Yet one high-ranking developer declined to comment due to being under NDA. And the original source of the latest round of PlayStation Mobile speculation, Engadget, rarely offers such detailed rumours about new gadgets or gaming hardware unless they are convinced they have rock-solid sources providing them the information – so, for now, read into all of that what you will...

Ed Barton, Senior Games Analyst over at Screen Digest, told us how he has heard similar rumours earlier this year that Sony was seriously considering integrating mobile telephony into its next gaming platform.

"The real question is, is this a dedicated PlayStation-branded Sony Ericsson phone or is this the next iteration of the PSP?" asks Barton.

"Pricing on mobile and PSP is also a major area for consideration. Konami currently launched Metal Gear Solid Peacewalker at £29.99. Whereas Rockstar sells Chinatown Wars at £5.99 on iTunes. The average sales price of iPhone and other mobile games is much lower than dedicated handheld consoles.

"So does Sony want [the PlayStation brand] to rush headlong into a development environment where the consumer expects games priced at 59p to £5.99?

"I don't think the stories so far about Sony's strategy for its next handheld have really considered these potentially negative implications of Sony entering the Android space."

Andy Hartup, Deputy Editor of PSM3 magazine reminds us that: "The idea of a PlayStation branded phone is nothing new – rumours have been doing the rounds for years. However, as sudden and unlikely as this story might seem there is circumstantial evidence that it could be fact.

"Firstly, European games tradeshow GamesCom is just round the corner. Last year Sony used its press conference to confirm the PS3 Slim, so they have form for announcing hardware at the event.

"Secondly, Sony officials have gone on record to say that PSPgo – which the new Sony Android phone is rumoured to resemble – was a test for future hardware.

"Many in the gaming industry assumed that was corporate back-covering following less-than-spectacular sales of the Go across the world, but today's news could put these comments in a new light".