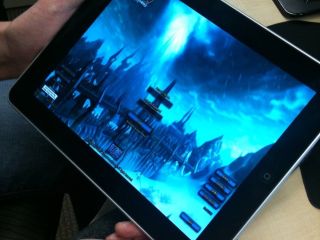 The World of Warcraft - as seen streaming on an iPad recently

A closed beta test has begun on the new expansion pack for Blizzard's hugely popular World of Warcraft MMO this week.

Invitations to participate in the new beta test for the World of Warcraft: Cataclysm expansion, due for release at some point later in 2010, are being sent out to selected WoW gamers with Battle.net accounts.

"Our focus with Cataclysm has been to build on the knowledge we've gained through the previous expansions to deliver the best, most compelling World of Warcraft content for our players to date," said Blizzard co-founder Mike Morhaime in a release this week.

"Gathering focused feedback during the beta test will go a long way in helping us reach that goal when we launch Cataclysm later this year."

Cataclysm is the third expansion for World of Warcraft, promising that the face of Azeroth will "be forever altered by the return of the corrupted Dragon Aspect Deathwing."

If you are not lucky enough to be one of the chosen few that receive an invite into the beta, then you can keep up to date with developments and see more over at Blizzard's www.worldofwarcraft.com/cataclysm/ game website.

Games developer Dave Perry recently showed off WoW running on an iPad, streamed to the device via his forthcoming Gaikai cloud gaming service.

World of Warcraft Producer J.Allen Brack declared that Blizzard had no current plans to port WoW to PS3 or Xbox 360 consoles at any point soon.