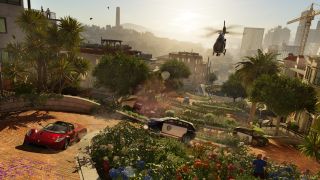 Despite receiving a fair amount of positive reviews upon its release, the original Watch Dogs does not have the greatest legacy.

More often than not the hacking boiled down to a simple case of waiting for the correct button prompt to appear on-screen, and the whole game controlled like a GTA clone from the early PS2 era.

"Missions that forced me to chase down enemy vehicles demanded more precision and timing than the game's cars felt capable of" said Arthur Gies in his review for Polygon. Gamespot called them "bouncy" and GamesRadar called them "heavy" and remarked that, aside from bikes and high-end sports cars, "most rides feel the same."

With Watch Dogs 2 Ubisoft Montreal is looking to solve this vehicle criticism by enlisting the help of Reflections, a Ubisoft studio based near Newcastle in the UK.

This is the studio that nailed the feeling of open-world driving in the Driver series while other studios were still struggling to get their cars to handle right.

The difficulty with getting open-world driving to feel right is that there's so much variety to it.

Reflection's secret sauce is its internal V-Edit tool, which it has been building upon since the Driver days.

The reason for the un-sexy name is that V-Edit (or vehicle edit) is a tool for internal use only. This isn't a piece of middleware like SpeedTree which is licensed out to any developer willing to front the cost, instead it's a tool designed for and by the developers at Reflections (although the team was quick to assure me that the tool is available to any other Ubisoft studios that require it).

A wild land of vehicles

To show off how the tool works, the team booted up Ghost Recon: Wildlands, another title that Reflections is lending its vehicle developing expertise, but one whose greater variety of on- and off-road military vehicles shows off the real range that the V-edit tool is capable of.

First up on our tour of the vehicles of Wildlands was a fairly standard military buggy. We were given a controller and asked to have a drive.

It was good, the suspension had to work a little due to the bumpy ground of the field we were positioned in, but it was fine. You know, like a buggy.

First he raised the suspension on the rear of the buggy, which shifted its weight appropriately, and then he raised it on the front, and the handling became significantly bouncier.

Then he started playing with the vehicle's 'grippiness' settings. Left at its default the buggy would slip and slide around a field just as you'd expect it to, but pretty soon we were spinning donuts all over the shop, pausing only when Merrick warned us with increasing despondency to please not crash into the other vehicles that had been spawned for us to test.

"You know when you're eight, and you knew how cars drove but you'd not driven before... it's that, we're not delivering a super-realistic thing, we're delivering that dream of really interesting driving."

The process of messing around with the way each of the vehicles handled was so fun that I asked if Reflections had ever considered including the functionality in some sort of 'cheat' mode, but unfortunately it currently has "no plans" to make the tool available.

Which is unfortunate, because nothing beats seeing a flatbed truck that's been jacked up on impossibly high suspension doing donuts in a field in Bolivia.

What Reflections appears to have on its hands is an immensely useful tool. One which allows it to tweak literally every vehicle in the game as it plays, to find something that doesn't just look right when you look at the values on a page, but something that simply feels right.

The vehicles of Watch Dogs 2

After using V-Edit to mess around with the vehicles of Ghost Recon: Wild Lands, we finally got to see what the team had been able to achieve with the tool in Watch Dogs 2.

Unfortunately though (presumably due to the game being almost finished) we weren't able to test out with the real-time handling edits of V-edit, we had to make do with the finished product.

The focus here was on trying out as many different vehicles as possible in the time we had available to us.

As Merrick says, each vehicle is a character in an ensemble cast, with its own unique quirks that make it fun to drive.

The first vehicle I jumped in was a McLaren-styled sports car, which whizzed around the streets exactly as you'd expect, but it was only when I stopped to try out a VW-esque campervan that I began to understand what Merrick was getting at.

Obviously it was a much slower vehicle than the sports car, but it also had a weight and bounciness to it that gave it a comedic character that was completely absent from the other vehicles.

I asked Merrick whether any one particular vehicle stood out to him as a favorite in the game.

"I've thought about that a lot over numerous games, not just Watch Dogs 2, and to be honest I've come to the conclusion that it's a balancing act that without each vehicle has its place, and without it having it's place the other vehicles don't feel right.

"So you can't pick out one specific vehicle because it's not like it's an act on its own. If they were all just like that vehicle then you don't have the contrast and it's not as much fun... it's an ensemble cast."

The theme of vehicles as characters in Watch Dogs 2 was one that got repeated several times during our demonstration of the game, and it makes sense.

After all, Reflections as a studio is focussed on just the driving aspects of the game, and as such the stories it's telling within this world are those of the vehicles.

In our time with the game we didn't get a chance to try out the hacking. We didn't see any story elements, and we didn't interact with any of the characters (in a traditional sense) of the game's world.

But when it comes to the driving, Watch Dogs 2 has found a balance that should make the act of simply driving around and experiencing the game's world enjoyable. If the game ends up containing as many driving missions as its predecessor, then it should be a satisfying experience indeed.