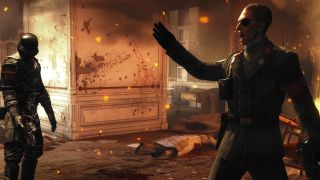 Wolfenstein: The New Order is out today on PS4, Xbox One, PC, and last-gen consoles.

You might have heard of it: it's the one that throws you into a alternate, Nazi-ruled 1960, puts a gun in your hand, and tells you to shoot, stab and strangle everything.

It's fast, it's bloody, it's off-the-wall-and-onto-the-Nazi-panzer-hound bonkers. But most importantly, it's a return to the series that kickstarted the FPS genre back in 1992.

We had a chat with the game's senior gameplay designer, Andreas Ojerfors, and pulled together five essential things you need to know about Wolfenstein: The New Order and the tech it's built upon.

Yes, MachineGames finds itself in the minority here, having created a multi-platform game that hits 1080p, 60fps on both Xbox One and PS4.

That's because the game's id Tech 5 engine was "an engine that was built to scale very well between different platforms," according to Ojerfors.

In fact, Ojerfors said that building the game across the two new-gen consoles was easier than the last time around: "The new platforms are much, much more similar to work with than what we're used to. So it is less of a challenge this time than it has been before."

2. It's the second game to run on the id Tech 5 engine, and the AI has been greatly improved

Wolfenstein is the second game to run on the id Tech 5 engine - the first was Betheda's Rage, released in October 2011 - but MachineWorks has developed it further, primarily with enemy behaviour and intelligence.

"I think the biggest difference is the AI system," says Ojerfors. "There's a big difference between the AI we wanted and the AI in Rage. We wanted enemies that are much more active, much more tactical. So we have done massive, massive changes to the AI system, and our tools of combat design as well."

"They use cover, they try to flank you, they try to be smart. But because we wanted it to be a game about movement and about being on your toes, you're not going to have enemies that just stay behind the cover for long.

They're going to come and attack you head on after a while, so you're not going to be able to stay put. It's the dance of combat."

3. It's not just a homage to Wolfenstein but to id Software games and FPS titles of yesteryear

"One thing we brought back is the frantic fast paced combat," says Ojerfors. "A lot of shooters today are much more about staying put in one place and taking out the enemy from a distance. While our game is going back to the idea of combat being about movement, about being mobile and agile and moving about, and about getting the upper hand against the enemy by moving… you're never going to be able to stay behind a cover for too long because the enemy will flush you out."

One old-school mechanic to return is the numeric health system. In The New Order, this is divided into separate sections that regenerate, but if an entire section is lost it can only be replenished with a health pack.

"So if you have a fight and only have a few points of health left, you'll generate up to 20% health," says Ojerfors. "Which means you're still hurting a lot. So how you performed in the combat really mattered, but we give you at least a fighting chance to continue on."

The action's tough, then. But with MachineGames built from the people behind narrative-heavy games such as Riddick and The Darkness, Wolfenstein doesn't lose sight of the story beneath the wreckage of Nazi-mechs.

"We do these narrative-driven games that have this pacing between narrative and action, and have a very physical sense of being in the game world," says Ojerfors. "We've tried to create this very varied experience. Sure it's about action, but it's also about drama, it's about history, it's about mystery, so I think that part comes from the history of the people working here.