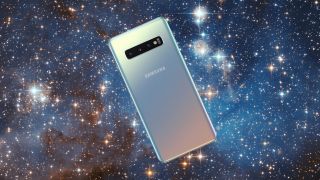 There's not long until the Samsung Galaxy S11 is unveiled - we're expecting a February 11 announcement - but the company may have just inadvertently hinted at a big new photography feature ahead of its launch.

On Samsung's website for the launch event, the company seems to have leaked the codename for the phone. This codename was picked up by GalaxyClub, which found that when you signed up for email updates on the event in certain regions, the ensuing URL contained the phrase 'Hubble-Bloom-Registration'.

It's worth pointing out that TechRadar didn't get this URL when attempting to replicate it in the UK, but that may be because it's only for specific regions or perhaps Samsung has covered up its error.

Hubble and Bloom are two codenames we've heard before; the former is what we heard the Galaxy S11 was referred to during development, and Bloom is likely the codename for the anticipated Galaxy Fold 2. We'd heard both titles before, but this is the first time we've heard it from the mouth of Samsung itself.

Because of the 'Hubble' moniker (after the space telescope) we've been expecting the Samsung Galaxy S11 to have Huawei P30 and Google Pixel 4-style astrophotography mode. Samsung has patented a software feature called 'Space Zoom', which sounds like it's designed to take pictures of celestial bodies.

By publishing the codename of the Galaxy S11, Samsung itself is backing up rumors that its upcoming phones will come with this photography feature.

And what can we unpack from the 'Bloom' name for the Samsung Galaxy Fold 2? Well not much, since you could refer to any foldable phone as 'blooming' like a flower when you open it.

If the Space Zoom feature turns out to be real, we'll likely hear all about it come February 11, when Samsung Unpacked is set to deliver us all the latest gadgets from the company. Stay tuned to TechRadar in the run-up as we show you our predictions, as well as all the latest rumors and leaks.