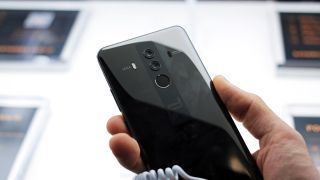 Huawei has just announced a Porsche Design variant of its latest flagship, the Mate 10 Pro.

Loaded up with an 18:9 screen and a 4,000mAh battery, the Mate 10 Pro is already an impressive smartphone, so what can the luxury Porsche Design branding add to the mix?

As with the Mate 9 Porsche Design, Porsche’s Mate 10 Pro swaps out the default colour-scheme for a deep black version.

In-hand, it feels identical to the standard Mate 10 Pro, looks sleeker and has a tendency to attract a few more fingerprints.

A 6-inch 18:9 screen, curved glass back and fingerprint scanner all combine to produce a very handsome, rich-feeling smartphone.

Loaded up with a vertical strip and the Porsche Design logo at the back, there’s no mistaking this thing for the vanilla version.

Unlike the vanilla version, this premium offering ships with 256GB storage, though sports identical remaining internals - a dual-camera, Kirin 970 processor and Android 8 under the hood.

Anyone thinking - Huawei has lost the plot asking that kind of money, hold that thought. With this phone’s announcement came news that its predecessor - the Mate 9 Porsche Design - has officially sold out.

Sporting the same price, there’s clearly a market for limited run, very expensive Porsche Design smartphones - and since Porsche Design jumped ship from BlackBerry to Huawei two years ago, both company’s public perceptions have been going from strength to strength.

It will be available in 20 countries from November, including the UK, UAE, Qatar, Singapore and a host of other European, Middle East and Asia locations. In February, it will be launching in the US.

For more on the phone at the heart of the Mate 10 Porsche Design - the Mate 10 Pro - check out our hands-on review.