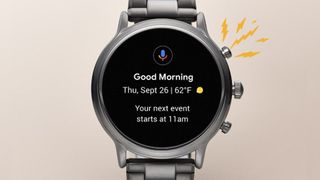 Today is a big day for smartwatches, as not only has the Samsung Galaxy Watch Active 2 been announced, but so has the Fossil Gen 5 range of smartwatches, which includes The Carlyle HR and Julianna HR.

The big new feature here is arguably a swim-proof speaker, which lets your watch talk back to you when using Google Assistant and also lets you take calls from your watch. Some watches from other brands already offer this, but where the Fossil Gen 5 range really jumps ahead is in its ability for iPhone users to also take tethered calls from their watch.

This will be possible via an app Fossil is bringing to the watch "later this fall" – so presumably sometime between September and November, and it’s a first on a Wear OS device.

The Fossil Gen 5 comes with a 44mm stainless steel case, a 1.3-inch screen, lots of straps to choose from – including leather, silicone and stainless steel – and it has a heart rate monitor, GPS, NFC (allowing for Google Pay), and a fast-charging battery with four different modes and supposedly over 24 hours of life.

It uses the Snapdragon Wear 3100 chipset, which has previously appeared in the Fossil Sport but otherwise hasn’t been used much, despite being the latest and greatest Qualcomm smartwatch chipset.

Other features include water resistance to 3ATM, and a variety of pre-installed apps, including one called Cardiogram which claims to be able to pick up signs of undiagnosed diabetes, sleep apnea, hypertension, and atrial fibrillation. Notably however there’s no ECG (electrocardiogram), which uses hardware rather than just software to detect heart issues.

With the likes of the Apple Watch 4 and Galaxy Watch Active 2 packing such a feature, the Fossil Gen 5 risks looking dated from day 1. Still, it ticks most of the other smartwatch boxes. If you want the Fossil Gen 5 you can get it now for $295/£279/AU$499.