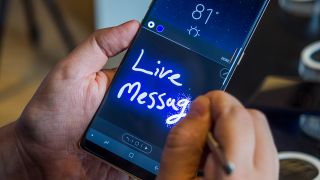 It's been a weekend of Samsung-related leaks and rumors – see also news of a fresh color for the Note 9 and a wireless charging pad that's on the way – and to round everything off we've got some updates on the upgraded S Pen that's going to come with the Note 9.

The fine folks at XDA Developers have been digging into the firmware for the upcoming Galaxy Tab S4 tablet, and have found some hints about the new S Pen and what the stylus is going to be able to do. Previous rumors have suggested that the S Pen will be the standout feature of the Note 9 and will probably come in bright yellow too.

According to the firmware, the new S Pen will be able to control music on the phone (play, pause and skip), operate the phone's camera shutter remotely, unlock the phone remotely, and launch specific apps and features that can be customized by the user as required.

The firmware already available for the yet-to-be-launched Tab S4 is the first Android 8.1 Oreo release from Samsung, and there's a strong probability that this is the software the Galaxy Note 9 is going to come with when it's officially unveiled on August 9.

The Tab S4 tablet might come with S Pen support of its own, but we'll have to wait and see. Most speculation so far points to Samsung unveiling the slate at this year's IFA expo in Berlin, which gets underway on August 31 – among other changes, the Tab S4 is rumored to be ditching the fingerprint scanner for an iris scanner.

Now we know a bit more about the features coming with the supercharged S Pen, but what about the rest of the Note 9 package? Upgrades to the internal components and dual-lens rear camera have been mooted, as well as the inclusion of Bixby 2.0.