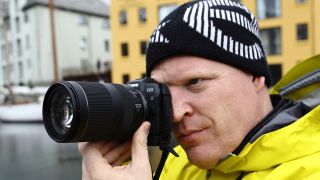 Canon already showed its RF lens hand back in February when it revealed that it had six new lenses under development, and the first of these, the RF 85mm f/1.2L USM arrived just recently. Now, it's the turn of the RF 24-240mm f/4-6.3 IS USM to make its official entrance.

The RF 24-240mm f/4-6.3 IS USM is only the second non-L series lens in the line so far, following the RF Canon RF 35mm f/1.8 IS Macro STM that was announced at the start of the series back in September. And, at least right now, it's only compatible with the two cameras in the EOS R series, the EOS R itself and EOS RP.

Billed as a travel-friendly lens, the RF 24-240mm f/4-6.3 IS USM covers a 10x optical zoom range, which is fairly unusual for a lens designed for an interchangeable-lens camera. The last time Canon achieved this was with the EF 35–350mm f/3.5-5.6L USM, which was released in 1993 for its EOS film SLR cameras.

Five-stop IS and Nano USM focusing

The lens has been designed with both zoom and control rings, the latter allowing for manual focus but also capable of being customized to the user's preference, enabling the user to adjust aperture or exposure compensation, for example.

Weighing 750g, the lens can focus 0.5m away from the subject when at its widest focal length, and this increases (although not by much) to 0.78m when extended to the 240mm end.

The lens's name also highlights the presence of an Image Stabilizer, a feature not found in EOS R and EOS RP bodies; this promises a maximum compensatory effect of five stops, and also has the honor of being the first full-frame Canon lens with Canon's Dynamic IS feature.