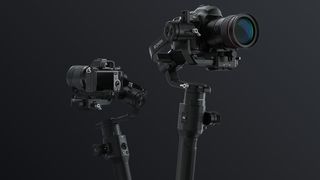 After the launch of DJI’s Ronin-S gimbal at CES 2018, it became a must-have accessory for the serious videographer. But, if you’ve ever used one you’ll know that it’s heavy, making it uncomfortable to use through a full day’s worth of filming.

However, DJI seems to have heard users’ concerns and has ‘accepted the challenge’ of making a professional gimbal that’s lightweight and “smarter” to use.

A sneak-peek video posted to DJI’s official Twitter account says we’ll be seeing the new gimbal sooner than we thought, with the launch taking place at the Challenge Accepted event on July 17.

We don’t know much about the upcoming gimbal, except that FCC filings from July 15 carry the name Ronin-SC/Ronin-S Command. Paperwork for a focus wheel, a new Ronin-SC camera grip, an updated focus motor and a wall adapter were also filed.

The teaser video doesn’t give too much away either. All we can tell is that the upcoming gimbal will be of a similar design to the original Ronin-S, but in a more lightweight and compact setup that makes for better ergonomics.

With competition strong from the likes of Zhiyun’s Weebill Lab, DJI needed to refresh the Ronin range to match usability. So here’s hoping we get to see a superbly refreshed stabilizer.

The launch is expected to take place at 9am EST on July 17 (1pm GMT / 11pm AEST) and we’ll bring you the news as soon as it happens.