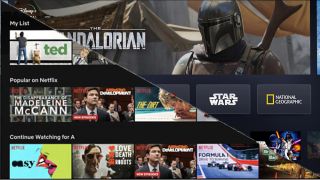 Disney CEO Bob Iger announced a new bundle offer that will include the company’s three main streaming services - ESPN+, Hulu and the upcoming Disney+ - all for the same price as a standard Netflix subscription ($12.99 per month in the US).

Iger made the announcement during a call with investors today, and was picked up quickly by The Verge.

The bundle, which is only available in the US, will almost certainly put pressure on Netflix and Amazon who have similarly priced services - and could be a key strategy in getting folks to ditch those services for ones offered by Disney.

“The positive response to our direct-to-consumer strategy has been gratifying, and the integration of the businesses we acquired from 21st Century Fox only increases our confidence in our ability to leverage decades of iconic storytelling and the powerful creative engines across the entire company to deliver an extraordinary value proposition to consumers,” Iger said in a press release accompanying the announcement.

Of course if you don’t want all three services, Disney+, Hulu and ESPN+ will still all be available separately for $6.99, $5.99 and $4.99 per month respectively.

The other competitor for Disney is Apple's upcoming Apple TV Plus service that will launch right around the same time as Disney+. The former has yet to be given an official price yet, but that could be something Apple will announce at its next event.

Should Apple's streaming service cost more than Disney's newly announced bundle, it could be in trouble from the outset. But, that said, now that Disney has shown its hand, Apple could announce a lower, more compelling price point or choose to bundle Apple TV+ with Apple Music for the same price as Hulu/Disney+/ESPN+.

Though, Apple will likely have an easier time in overseas markets like the UK and Australia, where it's already announced plans to offer its streaming service - something Disney has yet to confirm.

So when can you get your House of Mouse fix? Disney+ is expected to launch on November 12, 2019 in the US, with a global rollout expected in early 2020.