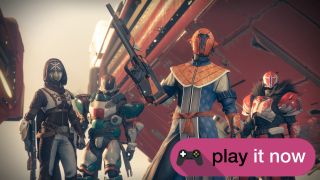 Update: Destiny 2 has been out for a while now but if you're new to the game and looking to pick up some gameplay tips, do make sure you give our guide to the game a skim.

Destiny 2 is constantly evolving, too, so swing by our hub to read about the latest news, updates and DLC.

Not many games manage to pull off being a huge, triple-A success and a cult hit, but then again, not many games are MMO-esque shooters made by Bungie. The original Destiny proved the House That Halo Built could move beyond Master Chief with swagger and joie de vivre, but the end result was still a game built to reward its earliest adopters with occasional rewards and a near non-existent story.

With that in mind, Bungie has attempted to build something far less impenetrable with its much-hyped sequel, dropping the difficulty down across the board and keeping a steady stream of new gear and weapons where the first game drip fed you loot. That change in difficulty might sound like heresy to veteran players, but then you discover the hidden genius of Destiny 2’s design.

At first it’s new campaign, complete with a somewhat forgettable story, might seem like a way to tick a box that was missing first time around. Ultimately however, it’s been designed to inform you every feature the game offers and, more importantly, keep you pumped full of fun for its 10+ hours of missions. When you emerge the other side you’ve unlocked a solar system of planets to explore, challenges to complete, dungeons to explore and loot galore.

It’s a consistent sense of empowerment that enables you to head out and keep having that fun, teaming up with other players to tackle regularly generated Public Events (which work like bosses with added puzzle elements) or going it alone and explore the new Lost Sector dungeons (filled with bosses and powerful new gear). You’ll likely already reach the level cap of 20 by this stage, but the ability to keep increasing your Power Level (a rating that represents how tough you are based on the strength of your guns and armour) is the delicious carrot on a stick that keeps you slavering for more.

Even the side-mission Adventures feel like fully-fleshed out stories. It’s clear Bungie didn’t want these side quests to feel like a poor excuse to give you a reward, instead offering up narratives that could almost convince you were still playing the main campaign. Whether you tackle these solo or with others (like practically everything else in Destiny 2, players on the same server can assist you/abandon you if they’re in the area), these added missions feel like anything other than filler.

The difficulty is there, but it’s restrained to Dark Zones (points during the Campaign or other missions where you can’t respawn, forcing you to play smarter while under fire) and tougher Raids (timed, regularly updated special missions that demand teamwork against some seriously tough foes).

The flipside of making things more favourable to casual players - and the sheer abundance of gear you can buy from NPCs before missions or found dropped by enemies (turning every foe into a walking loot chest) - is that seeking out those elusive super rare guns feels far less exciting. Destiny 2 has embraced (of all things) its inner Borderlands.

There’s a great sense of diversity to the environments you’re able to explore, too. Much like The Elder Scrolls Online and other MMO-style affairs, Destiny 2 breaks away from the boring, repetitive locales of the first game and attempts to burn your retinas clean off with colour, vibrancy and creative environmental design. Swooping around on your Sparrow (your trusty hoverbike), you’re instantly reminded of Bungie’s talent for designing memorable places and races, much like it did for years with Halo.

Nessus, a terraformed rock, now teems with robotic life, flourishing with red trees and grass like something straight out of a No Man’s Sky ad campaign. The Jovian moon of Io is lush yet rocky, filled with hills and canyons that make for perfect gunfight arenas. Even Earth’s ruined European outskirts invoke a sprinkling of The Last Of Us with its moss covered buildings and broken roads. The Saturnian moon of Titan is the only real misstep - its storm-racked sea platform just feels like an excuse to include something more recognisably urban, but it comes off as rote and forgettable.

So we know the guns are brilliant, and the ballistic mechanics are a dream to point and shoot, but the same can’t be said for the game’s approach to movement. Tapping the jump button will launch you into the air in a rising leap, but the speed of your descent is far too slow. Clearly built to enable players to have more time to shoot while in the air, it makes platforming and navigation a bore at best.

There’s a frustrating timing needed to make that double jump work in the first place, and it makes sections with enforced platforming (we’re looking at you, Titan) feel slow, painful and drawn out. We died more times in Destiny 2 after mistiming a jump and tumbling into the waves/depths below, than we ever did in a gunfight. Compared to the slick navigational mechanics of Titanfall 2 or Call Of Duty: Infinite Warfare, Destiny 2 feels oddly clunky.

Yet, even with that issue rearing its head now and then, it’s impossible not to love this second round of Guardian mayhem. Even the returning Crucible - Destiny 2’s answer to those that want a competitive multiplayer mode to counter all that RPG-ness - feels refreshed. There’s a shift away from the gung-ho firefights of old, and a move towards a more balanced, Overwatch-style team approach that’s all about working together rather than no scoping noobs for lols.

It might sound like Bungie has watered down its cult favourite formula to flings its doors wide open to the masses - and to an extent, it undeniably has - but the upshot is a game that’s far more respectful of its lore, far more generous with its best gear and far deeper in creativity than anything its predecessor offered. It’s the Destiny you know, and the Halo you used to love, all in one loot-filled package.