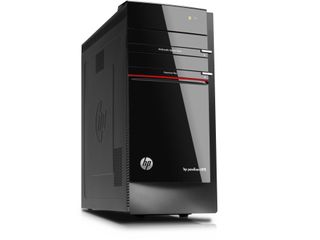 HP has announced its new desktop PC line-up in the form of redesigned Pavillion computers, complete with the h8 series which HP is describing as 'the most powerful HP PCs to date.'

The company is quite keen on the look of its new towers; each features clean lines and contrasting materials like a glossy black front panel and a metallic base, as well as hidden ports for that neat-as-a-pin computing look.

Sadly we can't say that they're exactly revolutionary designs, despite some models featuring a 'valet tray' with easy-access USB 3.0 ports for charging gadgets and transferring files.

All the Pavilion PCs also feature Beats Audio, a sound 'system' with the Dr Dre seal of approval.

There are several series' to decide between in the Pavilion family:

The Pavilion HPE h8 series might sound hateful, but actually features the most powerful HP PCs to date. These towers come with Intel Core i7 processors, Nvidia or ATI graphics processors and can support multiple displays.

HP has also knocked together the HP 2311x, a slimline monitor with HDMI connectivity and low power consumption.