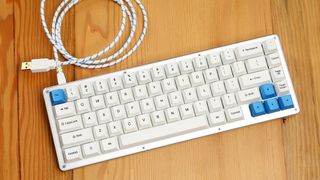 After a frustrating seven month wait, my custom-made WhiteFox keyboard has finally arrived.

It may have only sold 3810 units, but that actually means it's one of the better selling items from Massdrop, which was the exclusive seller of the keyboard.

Which is surprising, given that including import duties and taxes the keyboard cost me around $270 (around £200 / AU$360).

That figure sounds crazy, and in my more lucid moments I'd be inclined to agree with you, but me buying a WhiteFox is just one of several seemingly insane purchases I've embarked upon since tumbling down the rabbit hole of mechanical keyboards.

Maybe I should start from the beginning. I was in my first year of university when I first came across the phenomenon of so-called 'mechanical' keyboards.

Their proponents claim that compared to the cheap rubber-dome keyboards that come with most computers, mechanical keyboards will last far longer and be far nicer to type on to boot.

There are seemingly two kinds of people when it comes to mechanical keyboards: those who think the idea of spending a hundred dollars on a keyboard is beyond ridiculous; and those that can make their peace with it given the amount of use it'll get.

But there's actually a secret third type of person, and that's someone who not only buys an expensive keyboard, but then proceeds to spend hours modding everything about it from keycaps, to springs, and even building entirely custom boards.

The existence of an enthusiastic mechanical keyboard community might seem strange to some, but the users of sites such as GeekHack, Deskthority and the Mechanical Keyboards subreddit would beg to disagree.

At its most basic, these forums are a great place to find and post sexy keyboard pictures, but the community goes far deeper than that.

Why settle for the keycaps that come with your board when you can get some that are retro-styled? Why not replace the switches with some custom made Zealios? Or why not just go the distance and build an entire keyboard from scratch?

I'll be the first one to admit that literally everything about this quickly sounds like the ravings of a lunatic, but you have to understand that none of these 'products' (for want of a better term) are the result of a company exploiting the enthusiasm of a niche audience.

Every single one of them has been led by a member of the community, who has painstakingly drawn up designs, gathered pre-orders on various forums, and then approached a manufacturer directly to get their product made in what's called a "Group Buy".

Yes you might end up waiting months upon months for your order to arrive, and yes occasionally these community members turn out to be scammers and will disappear with thousands of dollars worth of pre-order money, but there's something special about knowing that you're one of only a couple of hundred people to own a certain item, even if it's admittedly something as silly as a keycap that looks like Iron Man.

Which brings me on to that WhiteFox.

Around seven months ago I saw the news that a prominent member of the community, Matt3o (real name: Matteo Spinelli), was organising a group buy for a completely custom designed keyboard.

The WhiteFox, as it was known, was special for a couple of reasons. Firstly it was entirely designed by a member of the community as a no-expense-spared luxury keyboard. That means expensive PBT plastic keycaps with legends that aren't going to wear away, a solid aluminium housing and a layout that is as compact as possible without sacrificing too much functionality.

You can read a full account of how the WhiteFox came to be on Matt3o's blog.

But what was also special was the sheer amount of customizability the keyboard would allow.

You could opt for a huge variety of switches, from the mainstream Cherry MX's to the lesser known Gateron's and even community-made Zealios.

You could decide between five layouts from US to UK to even some oddities like the 'TrueFox'.

Or you could go off piste entirely and buy the board completely unassembled and put it together yourself.

The only downside was the price. $200 is hardly cheap for any item, but in the end it was the exclusivity that finally got me to sign up. Within 30 minutes of the group buy going live on a niche website 200 orders had already been made, and with a run of only 500 units being promised, time was of the essence if I was going to avoid buyer's remorse.

Naturally in the end the amount of interest meant that the run was extended to 2000 units, but that's still a tiny number when compared to the manufacturing runs of the likes of Corsair, or Razer, the big dogs in the world of mechanical keyboards.

After a seven month wait, my WhiteFox finally arrived, and I couldn't be happier.

Its Cherry MX clear switches have a lovely amount of resistance to them, it's got a little more resistance than brown switches without being as tiring as the comparatively stiff buckling springs.

Some might feel like the board is a little cramped with the arrow keys eating into space that would otherwise be taken up by the right shift key, but I like the fact that they're so close to the little finger on my right hand to allow me to quickly jump around a word document.

Not to mention the fact that they keyboard is completely re-mappable, meaning that if I want to switch the positions of the 'Delete' and the 'W' key then I'm absolutely free to do so.

I'll probably be replacing the keycaps soon, but for now I like their height, as well as the satisfying graininess of their more premium PBT plastic.

The braided cable... I'm less sold on. It's nice that it matches the color scheme of the board, but as soon as a colleague pointed out that it looks like an iron's power chord I haven't been able to look at it in the same way.

All of this, the keycaps, the switches, the aluminium backplate, means that the board is a lot of fun to type on.

That's not the point though. The important part of the purchase was the fun of being a part of an exclusive little club. An exclusive group of people that hold a love of a particular item to such an extent that they're willing to PayPal money to people they've never met on other continents, just so they can (hopefully) get some new plastic to attach to the thing they use to control their computers with.

It's crazy. It's so obviously crazy that I almost feel silly writing it in words. But at the end of the day being a bit weird about keyboards goes beyond the little rectangle that sits on your desk and becomes a group that you love in part because of just how obscure the whole thing is to an outsider.

So this is a thank you. It's a thank you to Matt3o, to the fine folks at r/MechanicalKeyboards, and even to that guy that bought some keycaps off me on eBay that sent through a message calling me "good sir".

You are all complete weirdos, but please don't ever change.