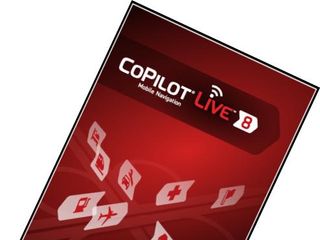 Sat nav on the iPhone looks set to be big business. The release of the £26 Co-Pilot Live 8 UK and Ireland app into the App Store has followed

Today, TomTom has released its take on full iPhone turn-by-turn. The £60 app has arrived several weeks earlier than expected, probably due to the release of the other apps.

At less than half the price of all its competitors, Co-Pilot's parent company ALK has seriously undercut the competition and will be looking to capitalise on those not bothered about the TomTom name.

Like the other sat nav iPhone apps there's no traffic information on Co-Pilot Live 8 for iPhone as yet, while TomTom is the only one to include information about pesky speed cameras thus far.

The whole app is extremely easy to use and feels very much like a proper navigation app. It doesn't even pander to Apple's iPhone keyboard design, instead sticking to ALK's own design. This is a little odd, but is not a big issue.

The navigation display is clear and crisp with easy zoom controls, a customisable info bar and easy access to adjust settings for your route. 2D or 3D mapping is available, and you can also easily view your itinerary, unlike the Navigon app.

If you have music playing, the voice instructions simply mingle with the music. There's no way to mute these except to go deep into the settings. This is a little unfortunate, but is one of the limitations of the handset. Of course, the iPhone will only single-task Co-Pilot as with any other third-party app, so you'll have to exit completely to perform any other function.

Traffic information is planned for many of the systems later in the year, Co-Pilot included. Co-Pilot does have access to Live services, such as weather or roadside assistance, but the traffic option is blanked out.

Selecting destinations is quick and easy and, unlike in the Navigon app, you can use full UK postcodes. You're also able to go on just an address, a previously saved location (such as where you left your car), a point of interest, map pin or even co-ordinates. The input is intuitive and flexible.

Points of Interest can be turned on or off - in the grab above, they're off. The app makes it easy to add in a Detour or Quick Stop to get cash or petrol.