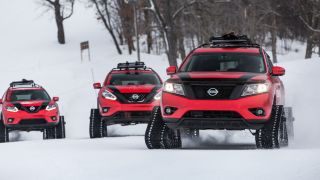 Nissan revealed a trio of transformed crossover utility vehicles (CUV), an all-new Armada sport utility vehicle (SUV) and more details on the half-ton Titan pickup truck at the Chicago Auto Show this week, and they're all ridiculously cool.

The Winter Warrior concepts started off as a regular Nissan Pathfinder, Murano and Rogue, but the stock wheels and tires were immediately tossed out. In place of the wheels and tires are Dominator Tracks from America Track Truck, which transforms the CUVs into unstoppable, snow-traversing vehicles.

I know the transformation is straightforward, but there's something cool about snow tracks on a car that opens my imagination to endless hours of fun. Just imagine driving through miles and miles of snow-covered terrain.

Since the Winter Warrior concepts are based on the regular CUVs, you can traverse the snow in comfort with heated seats and cup holders for non-fat, molten chocolate lattes with whip – just add snow if it's too hot.

Nissan's Armada started life as a large SUV based off the company's F-Alpha truck platform, which is shared with the Titan and Frontier pickups. The SUV has been around since the 2004 model year, with minor changes along the way.

When Nissan released its all-new Titan XD pickup truck last year, the Armada's existence was uncertain – until now. Nissan used the windy city to roll out the more rugged 2017 Armada.

While the previous Armada was engineered exclusively for American buyers, the all-new 2017 model is based off the internationally-renowned Nissan Patrol, which was Nissan's answer to the Toyota Land Cruiser, and just as tough.

This isn't the first time a Nissan Patrol-based vehicle has made it to the US, however. The Infiniti QX80 (formerly known as the QX56), which started life as a more lavish version of the Armada, switched over to the Nissan Patrol underpinnings for the 2011 model year while the Armada lagged behind.

Details aside, I love the look of the new Armada. It's a giant SUV that maintains the old-school, box-on-wheels look, with a sprinkle of rounded curves to make it modern. My favorite-looking SUVs are still the FJ80 Toyota Land Cruiser (1991-1997 era) and the late-'90s Jeep Grand Cherokee's, because I'm a sucker for that tough, utilitarian, go-anywhere look.

When I look at the Armada, it makes me want to bolt down a tent on the roof, slap on a ladder on the back and take my family on an epic road trip to Moab, Utah. It screams, "Let's go nuts in the desert or snow."

The Nissan Armada has the chops to back up its looks too, with an available advanced 4-wheel-drive (4WD) system. The All-Mode 4WD system dynamically adjusts power to the front or rear axles for optimal traction during everyday driving, but experienced drivers can switch to a lower gear range, 4WD mode to slowly take on the toughest terrain.

The standard 5.6-liter, V8 engine pumps out 390 horsepower and 401 pound-feet of torque, enabling the Armada to tow up to 8,500 pounds. A seven-speed automatic is the only transmission available.

Inside, an 8-inch NissanConnect infotainment system provides navigation and radio functions. My experience with the NissanConnect system in the 2016 Leaf EV was so-so, so I don't have high hopes for the Armada. A Bose premium sound system is standard too, which I'm not fond of either.

Regardless, the Armada offers a full suite of driver assist technologies, like adaptive cruise control, blind-spot monitor, back-up collision intervention, lane departure prevention, automatic emergency braking and most importantly, a 360-degree camera. Nissan's excellent Around View Monitor should make the ginormous Armada much easier to park at the mall and soccer practice.

A Titan for the regular truck buyers

Nissan let loose details on the half-ton Titan pickup truck in Chicago, too. The all-new Titan XD launched last year as a diesel-burner that was larger and more capable than a typical half-ton, but less capable than the one ton pickups from Ford, Chevy and RAM. Techradar will be reviewing the Titan XD shortly.

The details of the regular Titan aren't too surprising, though. The half-ton truck is 14.7 inches shorter than the Titan XD and powered by the same 5.6-liter V8 and seven-speed automatic transmission as the Armada and previous generation Titan.

If Nissan was all about the off road crowd at Chicago's auto show, it will be interesting to see what kind of crowd the automaker appeals to at the upcoming show in New York City late next month.