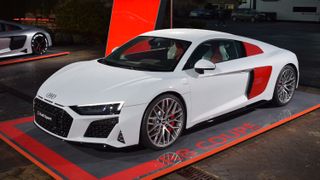 Audi is increasingly looking like the car world's answer to Apple. That might seem like an absurd statement, but Audi's cars and approach to automotive tech and innovation both resembles the Apple of the past and present.

Let's put this into context. Ferrari with its gorgeously designed supercars is most like Huawei, offering fantastic hardware but with a driving experience that's can feel a bit overwhelming much like the user interface of the Huawei Mate 20 Pro.

McLaren makes car that appeal to engineering nerds, much like Google Pixel phones tickle the fancy of Android developers. And OnePlus, with its impressive OnePlus 6T that offers mostly flagship features at mid-range prices, is something akin to Jaguar or BMW.

But Audi is most similar to Cupertino. The Teutonic car marque builds cars that pretty much across the board offer a uniformly high-level of build quality that's synonymous with the band. Sounds familiar? Well if you want that level of consistent quality in the tech world, you only need to turn to Apple.

Quality has a price

Even Apple's cheapest new phone, the iPhone XR is priced higher than most top-end Android phones, much like Audi's cheapest car, the A1, still comes with a distinctively premium price tag when compared to rival cars.

While Apple seems to have left behind the 'it just works' semi-slogan, there's no doubt that the Cupertino company offers products that are easy to get to grips with. Android may have improved leaps and bounds, but iOS is arguably the slicker operating system. And macOS is just more accessible than Windows 10.

In the car world, Audi offers that accessibility. I've had the luxury of driving a suite of Audi's this year from the hefty Q8 flagship SUV to the compact A1, and all have felt easy to just get into and drive. That's mostly thanks to the excellent tech and driver aids the cars offer.

But the best example of 'just works' came clear to me with the new Audi R8. While mostly a design facelift on the previous generation R8, the sports-meets-supercar comes with a howling 5.2-liter V10 engine that kicks out up to 613 horsepower, makes the 0-62mph sprint in 3.1 seconds, and tops out at 205mph. That's a lot of performance.

Audi let me take the new car out on the Ascari racetrack outside of Spain's Malaga, where where I could make use of a heavy right foot.

Now I'd never driven a car with more than 300bph, let alone double that. Nor have I driven such a car on a track, let alone one that's known to be rather challenging. Oh and it was raining.

You'd think the new R8 would be beyond a challenge for someone not versed with being behind the wheel of supercars, but it was surprisingly easy to drive. Thanks to some very clever engineering at work, even when my limited talent ran out the car kept me on the track, sliding a little to remind me it has some bite, but preventing a spin that could see more than $100,000/£100,000/AU$120,000 worth of fine engineering and design get scrapped.

I'll admit that a slightly over zealous stab at the throttle and mistimed cornering saw me detour the Audi onto a small section of the circuit's grass, but that was my fault than the car's.

To that end I was reminded of how Apple has lots of little features working in the background to make life easier without being intrusive; think the AI features the iPhone Xs's A12 Bionic chip offers or how some slick engineering allows Face ID to work on the new iPad Pro regardless of how its orientated.

The last similarity between the car maker and the premium tech brand lies with innovation. I accept that Apple's level of innovation might not be as prominent as it once was but Apple is still a company to watch when it comes to setting the standards for tech.

Take the use of an electrocardiogram sensors in the latest Apple Watch as an example, which shows how Apple can still surprise with the features it adds to its tech that can range from a nice to have to a life-saving addition. Or how Apple was the pioneer of virtual assistants ijn consumer tech with Siri; granted Siri is a dunce compared to the Google Assistant, but Apple got the ball rolling when it comes to barking commands at phones.

Audi has that ‘Apple approach’ to innovation both old and new. Take for example its Virtual Cockpit digital dashboard and touchscreen-oriented infotainment setup that it's pushing out across its range of cars. Such tech isn't revolutionary but it does make sitting in and driving Audis a better experience.

Yet where Audi has elements of the older Apple is with the way it's on the road to self-driving cars and impressive electric vehicles.

The Audi E-Tron all-electric SUV, set to make its on-the-road debut next year, is arguably the antithesis of this, showing how when Audi sets it mind to bring in notable use of cutting-edge technology and engineering, it actually gets it off the concept stage and into the market, not unlike Apple.

So as 2019 matures, so too does an Audi that's poised to push the boundaries of technology and engineering with an attitude towards cars that Apple has, or at least had, to its premium tech.