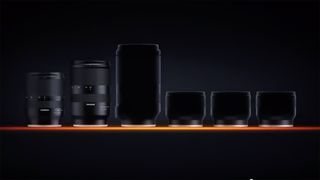 Full-frame photography is more accessible than ever, and it's made all the sweeter by third parties developing interesting lenses for modern mirrorless bodies – and it seems we're getting an extra shot of it soon, courtesy of lens manufacturer Tamron.

The company is teasing what appears to be four new lenses, along with the hashtags #fullframe and #mirrorless. While it's only revealed some silhouettes and the claim that whatever is coming is coming soon, the fact that the company's only current full-frame-friendly lenses designed for mirrorless cameras are specific to Sony's Alpha bodies, points to them being available in this fitting at the very least.

So what can we tell from what's been revealed so far? From the silhouettes and the way the lenses appear in the video (which you can watch below), it seems there'll be at least three prime lenses, each with a wide-angle to standard focal length, together with a zoom lens.

Right now, Tamron's lens stable for the Sony E-mount line comprises the 28-75mm f/2.8 Di III RXD and the 17-28mm f/2.8 Di III RXD. It also offers the 18-200mm f/3.5-6.3 Di III VC for users of Sony's cropped-sensor mirrorless bodies, which is compatible with full-frame cameras, albeit with a crop and a lower resolution output.

Alongside its mirrorless lenses, Tamron has continued to develop optics for DSLR users, such as the SP 35mm f/1.4 Di USD that was announced a few months back for Canon and Nikon full-frame DSLR shooters. And hopefully we won't have to wait too long to see whatever it's cooking here.