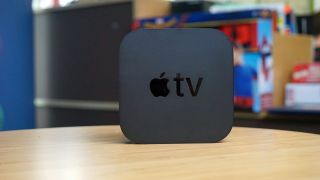 Apple is getting serious with its forays into creating custom television content. It's already working on a reboot of Amazing Stories with Stephen Spielberg, and now Recode and Deadline report that the iPhone maker has bought two whole seasons of a show featuring Jennifer Aniston and Reese Witherspoon.

Details are scant — the show apparently doesn't even have a name yet — but we do know that the new program will focus on what goes on behind the scenes of a morning talk show.

Netflix was also reportedly interested in the series, and the resulting haggling may have been a big part of the reason why Apple ended up buying two seasons rather than one. Fittingly enough, Netflix first got into the straight-to-series scene by outbidding HBO for House of Cards.

The news serves as a reminder that Apple is taking advantage of its massive cash reserves to secure extremely recognizable names for its ventures into TV. Now, of course, it has to ensure the actual content is good as well, especially in a market that's already crowded with the likes of Netflix, HBO, Amazon, Hulu and others.

Aniston and Withersoon are both executive producers for the series. The series itself will reportedly draw details for accuracy from New York Times reporter Brian Stelter's book Top of the Morning, which offers an insider's look into the frantic world of morning talk shows. Stelter himself will be a consultant for the series.