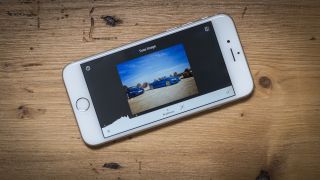 Apple today released a letter explaining that it’s very, very sorry for that whole bit about forcing older iPhones to slow down in order to preserve their batteries.

As a way of attempting to make up for what it calls the “misunderstanding,” the company is now letting anyone who has an iPhone 6 or later iPhone replace their battery for just $29/£25, which represents an impressive discount over the $79/£79 Apple usually charges.

The company also states that the batteries are “consumable components,” and that wording will likely lead to renewed criticisms that Apple should allow us to replace our batteries ourselves.

Unfortunately, the offer is only in place through from January through December of 2018, but Apple also claims that it will introduce new elements to a future iOS 11 update that give a little more information about your battery’s health. As part of that effort, Apple also introduced a lengthy new support document covering 'iPhone Battery and Performance'.

Many iPhone owners have believed that Apple has been intentionally slowing down their devices or years, usually with the assumption that Apple was trying to get people to keep buying newer phones than the ones they had.

The truth, according to Apple's letter, is that it’s a little more complex than that. As the newer iPhones since the iPhone 6 age, their batteries don’t remain strong enough to properly power the processor, and so Apple slows them down a bit so as to keep the processors functional.

As we mentioned in our previous coverage, Apple already essentially announced that it was doing this with the release of iOS 10.2.1, which was meant to stop some iPhone 6 units from unexpectedly shutting down.

All that the patch notes said at the time, though, was that 10.2.1 "improves power management during peak workloads to avoid unexpected shutdowns on iPhone." And that improvement worked, and it worked quickly.

Unfortunately, the true nature of that fix wasn’t revealed by Apple itself; instead, it came from independent researchers such as Geekbench's John Poole who showed how Apple was significantly throttling the iPhone 6 and other phones, leading to accusations of betrayal of trust, lawsuits, and general anger.

Hopefully cheaper battery replacements turn out to be a big step in restoring that trust, but considering that there was already a cynical belief that Apple was mishandling its customers in place, the aftershocks might be felt for a while yet.