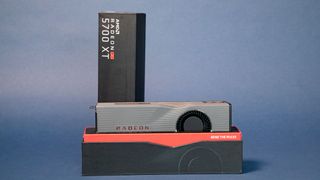 The fight between AMD and Nvidia for graphics card dominance is certainly getting heated, with AMD admitting that it has weaponized price cuts in a bid to get Nvidia to over-price its graphics cards.

While many people assumed AMD cut the prices in reaction to Nvidia’s launch, according to Scott Herkelman, AMD’s vice president and general manager for the Radeon division, the price cut was pre-planned in a bit to get Nvidia to over-price its new graphics cards.

The revelation comes in an interview between Herkelman and Hot Hardware, which you can watch below:

According to Herkelman, AMD had a hunch that Nvidia’s large die size on its Turing boards would mean that the company would struggle to cut prices without impacting its margins. “We know that they [Nvidia] have a tremendous burden on their gross margins, because their die size is big, and so we just game-played suggested retail prices.”

So, it appears AMD put out original prices for its GPUs, then waited to see how Nvidia would price its new graphics cards.

If AMD really did use price cuts as a trap for Nvidia, it’s pretty sneaky. AMD has always been quite competitive when it comes to price compared to Nvidia, but it’s remarkable to hear about such a strategy from a senior staff member.

It looks like the move could pay off. Reviews of the RTX 20 Super cards have been largely positive, but many have pointed out how AMD’s cards now offer much better value.

Nvidia, of course, could counter that its RTX Super 20 cards offer better performance than AMD’s, and therefore justify the higher price.

Regardless, it’s enjoyable to see the two competitors fight over our custom, and it should hopefully benefit consumers by resulting in lower prices and more innovative products.

AMD certainly seems to be enjoying it. “It's been so much fun these last couple of weeks just playing that out,” Herkelman says. “It's just fun finally to win.”