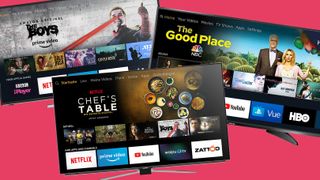 Not content with being embedded into smartphones, tablets, web browsers and your home's smart speakers, Amazon is continuing its push into televisions with the announcement of a number of new Fire TV Edition sets destined for the UK, Germany and Austria.

The retailer giant has launched more than 15 new Fire TV Edition products (one of which is a new soundbar) which see Amazon's Fire TV streaming technology and Alexa smart assistant come built-in.

Amazon has teamed up with television manufacturers JVC, Grundig and Toshiba to bring its fleet of new Fire TV Edition sets to market.

For those in the UK, you will be able to get your Fire TV experience fill thanks to a partnership between Amazon, JVC and Dixons Carphone.

The JVC Fire TV Edition Smart 4K Ultra HD HDR LED TVs are the first in the UK to come with Amazon's experience, and will be available at Currys PC World and Amazon.co.uk.

There's support for HDR10 and Dolby Vision, for an enhanced viewing experience, and you'll be able to pick from three sizes; 40-inch, 49-inch and 55-inch.

You'll also get access to a host of apps including Prime Video, Netflix, YouTube, ITV Hub, All 4, My5 and more.

Prices will start from £349, but we're still waiting to hear when the JVC Fire TV Edition will go on sale.

Potentially the most interesting of the bunch are four OLED Fire TV edition televisions from Grundig, but they'll only be available in Germany and Austria for now. Whether they'll roll out to other countries remains to be seen.

Two of these four feature far-field voice control - a world's first - allowing you to harness the power of Alexa to power on/off, change channel and adjust volume without the need to lift a finger.

In total there are 11 new Grundig Fire TV edition sets, which means the firm's entire range now ships with Amazon's smarts inside.

The full Grundig Fire TV Edition range is as follows:

A number of other manufacturers have also been given clearance to produce Fire TV Edition sets, including Skyworth, Arcelik, TPV, Compal, and Imtron - which means we'll likely see even more televisions with Amazon's smarts arrive in Europe over the coming months.

IFA 2019 is Europe's biggest tech show, and the TechRadar team is in Berlin to bring you all the breaking news and hands-on first impressions of new TVs, laptops, wearables and other products as they're announced.