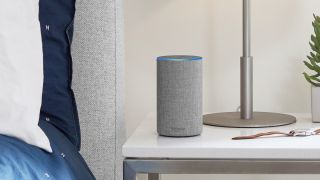 Amazon has announced that certain Alexa skills will now be able to work together to act upon your requests and commands.

Called 'skill connections', the new feature enables a skill to "use another skill to perform a specific task".

So, if a company has an Alexa skill that helps users find highly-rated restaurants in the local area, it could add a skill connection with another company whose skill helps users book tables at restaurants.

This means that Amazon Echo users will "no longer [need] to relay details between separate skills", which will hopefully make the Alexa experience more streamlined.

We all know that Amazon Alexa is pretty smart already – the voice assistant can read you the news, control your smart home, and even tell you jokes.

However, much of Alexa's functionality comes from its skills, many of which are created by third-party brands who want to make their service or product available to Amazon Echo users.

These 'skills' are essentially tricks that your Amazon smart speaker can perform for you – from turning on the security lights in your back garden through to ordering a pizza to your front door.

So far, Alexa skills have been somewhat disconnected; as Slash Gear points out, "rivaling companies raced to grab a piece of the Alexa or Google Assistant market" in the early days of the skills system, which means that they became "isolated gardens".

If Amazon's hope is that skill connections will bridge the gap between these different skills, it will need to rely on companies to implement the new feature – and to play nicely with each other.

So far, skill connections are only available for printing, booking taxis, and booking restaurant reservations, but hopefully this list will grow, making the feature truly beneficial to users of Amazon Echo devices and other Alexa-enabled gadgets.

Should I buy an Amazon Echo?

If the idea of connected skills appeals to you and you're thinking of buying an Echo speaker, it might be worth holding off until Amazon Prime Day 2019.

We're expecting to see significant savings across a range of Amazon devices, including the Echo, Echo Plus, Echo Dot, Echo Show, and perhaps even the latest addition to the range, the Amazon Echo Show 5.

The event kicks off on July 15, and last for 48 hours – we'll be reporting on all the best Prime Day deals, so make sure you check back with TechRadar then.