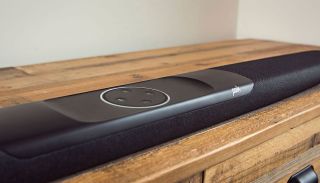 Amazon's mission to get its Alexa voice-activated assistant in any gadget with a speaker continues apace, with CES seeing the AI helper pop up in a relatively unexpected place – within a soundbar.

Polk Audio's Command Bar has Alexa built directly into it. It's even got the four-button Alexa hardware buttons that you'd see on top of an Amazon Echo device. You'll be able to use voice commands to control audio settings such as volume and and mute, but also to make all the requests you'd usually make of an Alexa-enabled device, from streaming songs from your favorite music player to controlling smart home devices.

As well as featuring Wi-Fi and Bluetooth connectivity, the far-field mic equipped soundbar presents itself as a capable bit of kit in A/V terms, too.

And, in a nice final touch, the included remote features an Alexa action button that, when pressed, briefly lowers the volume level of the soundbar, letting your voice command be heard clearly and activated from a distance – particularly useful if you're using it in a noisy, dedicated home cinema space.