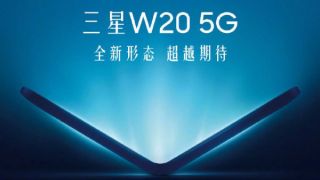 The foldable phone future is barely here, with only the Samsung Galaxy Fold readily available for people to buy, but it looks like Samsung could be about to launch its second foldable already – and it could be shown before the Motorola Razr.

This phone is the Samsung W20 5G, and it has been teased by China Telecom in a Weibo post. All we know so far is the name, a November release date, and the fact it's a foldable 5G phone, but that's still a lot to go on.

The Samsung W20 is a successor to the W2019, a flip phone that never made its way out of China, and fittingly the W20 has a clamshell-style fold like the anticipated Motorola Razr.

We don't know the specs or features for now, but if the tease is accurate we will do in the coming days, so stay tuned to find out more.

We're expecting the Motorola Razr to launch on November 13, almost exactly in the middle of the expected launch window of the Samsung W20.

This means there's a 50% chance the Samsung W20 will get shown off before the Motorola Razr, in which case Samsung would be the first company to put out a foldable clamshell device.

Saying that, the Motorola launch event is for a global product launch, while Samsung's phone could be China-exclusive, based on the fact the tease was from China and the W2019 was exclusive to the country.

So while the Samsung W20 could launch first, the Motorola Razr could be in our hands sooner, as devices that launch in China often take months to become available in the west, if they ever do.

We'll know for sure by the Razr's launch on November 13 though, so stay tuned to TechRadar then to see the new foldable phone.