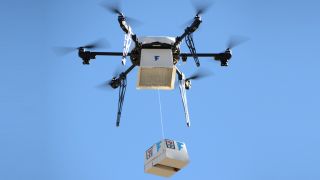 While the likes of Google's Project Wing and Amazon's drone delivery service are still working out the details in delivery via autonomous aircraft, it appears the home of the Slurpee is strafing ahead the competition.

7-11 managed to complete 77 individual deliveries-by-drone as of this November, according to a press release from Flirtey, the company which operates the courier drones for the convenience store chain.

12 different customers in Reno, NV who lived within a mile of the test 7-11 store participated in the service.

Using a dedicated app, the customers placed orders from a special list of available items ranging from over-the-counter medicine to breakfast items, and the GPS-guided drone would then make the drop in the average span of ten minutes.

Flirtey claims its partnership with 7-11 marks the first time a drone delivery service has made regular drop-offs to a customer's home - a monumental achievement in the field, especially given the progress of its competitors.

The aforementioned projects from Google and Amazon, being larger in scope, still need to work with regulators to find ways to operate their services within the legal confines of drone operation.

7-11 and Flirtey were able to get a leg up seemingly by taking baby steps. Laws currently require drones (even autonomous ones) to operate within the operator's line-of-sight unless given express permission from the FAA - something services like Google and Amazon's services would likely function better without.

By confining its efforts to a select group of people and making regular deliveries nearby, 7-11 was able to rack up considerable experience as unlikely leader in the drone delivery biz - and with seemingly good reception, as one customer is reported to have remarked the experience as something out of "the real-life Jetsons."

Flirtey made its first official autonomous drone delivery to a customer back in July, which you can watch in real-time in the video below: