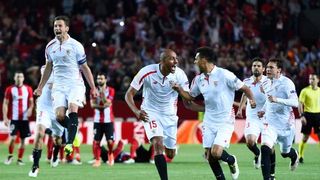 The UEFA Euro 2016 football championships is almost over, with Portugal Vs France playing in the Euro 2016 Final on Sunday July 10.

Read on to find out how to watch the Euro 2016 FInal online live and for free.

If you're a soccer fan who's already enjoying the competition, we also feature the best tech for enjoying the beautiful game this summer, as well as all the ways you can watch the UEFA Euro 2016 games.

We'll take a look at the top gadgets that will make watching Euro 2016 more enjoyable, and share some tips and tricks to ensure you never miss a game, or a goal.

The good news is that – assuming you have a TV licence in the UK – it's easy to watch Euro 2016 games for free, with most of the games being shown on ITV and the BBC. You'll also be able to listen to it on BBC Radio 5 Live.

If you're not in the UK, but want to watch Euro 2016 games, then check out the list for the worldwide UEFA Euro 2016 broadcasting rights, which will tell you which channel will be showing the matches.

How to watch UEFA Euro 2016 online for free

Because the BBC and ITV have the rights to Euro 2016 games, it's easy to watch the games live online – just use the BBC iPlayer or ITV Hub online streaming services. These can be viewed through your web browser, and many smart TVs and games consoles have apps for them, as well as Android and iOS smartphones.

Websites such as TVCatchup (which also has an app for smartphones) is another handy source for watching the Euro 2016 games online for free.

If you're not in the UK then a number of other broadcasters will be streaming the Euro 2016 matches online, such as ESPN. The UEFA Euro 2016 Live website is a handy resource for finding out which games are streamed and where to watch them.

If you want to try watching Euro 2016 games online with a service that's not available in your country, then using a VPN (Virtual Private Network) can help. This masks the country you're browsing from, making it appear that you are browsing from another country instead.

Check out our guide on the best free VPN tools 2016 to find a suitable VPN to watch the Euro 2016 games.

Make sure you don't miss out on a game

The official UEFA Euro 2016 website has all the fixtures and kick-off times, and the BBC also has a comprehensive guide. However, one of the fastest ways to see when the next game is on is to simply type 'euro 2016' into Google – you'll see a schedule of the games at the top of the results page.

There's also the official Euro 2016 app for iOS and Android devices, which will deliver match times straight to your smartphone or tablet.

Check out our list of the best apps and games for Euro 2016 for more app suggestions.

Keep up with Euro 2016 podcasts

With the Euro 2016 championships running from 10 June to 10 July, there may be annoying times when you're not near your TV to catch the latest news.

However, a great way to keep up with all the Euro 2016 action is to subscribe to a podcast, so you can listen to what's been going on while you're away.

We've rounded up the best Euro 2016 podcasts to download right now to help you decide which ones you should be listening to.

How to get the best viewing experience for Euro 2016

If you're going to be watching the games at home then you'll want to make sure you're enjoying the best viewing experience possible. If you're considering buying a new TV for Euro 2016 then the Hisense 75M7900 (£2,485, around $3,594, AU$4,832) is definitely worth considering – it boasts a huge 75-inch 4K screen and HDR, 3D and Smart TV technology. Hisense is also an official partner of the Euro 2016 championship.

While we've heard the disappointing news that neither the BBC nor ITV will be showing Euro 2016 matches in 4K, you'll at least be getting a UHD TV set that's extremely future-proof. Hisense isn't quite a household name in the UK or US yet, but it's a big deal in its native China, with a growing reputation for premium features in TVs that are quite a bit cheaper than the competition.

If you're after a (slightly) smaller – and curved – screen, then Hisense also has the 65XT910, a 65-inch 4K TV that uses proprietary Hisense ULED 2.0 technology for vibrant high-contrast images.

You'll want to make sure your TV is properly calibrated before the first ball is kicked at Euro 2016, so that you get the best possible image quality. As football is a fast-paced sport you'll want to make sure your TV can handle quick-moving action smoothly – which may mean turning off certain image processing settings. Check out our guide on How to set up your TV for the perfect picture to find out more.

How to get the best audio experience for UEFA Euro 2016

The chants of the crowd, a shrill whistle from the referee, the insults traded between the players – it's all part of the experience. Well, maybe not the insults part.

However, if you're planning to get fully immersed in the Euro 2016 matches, you won't want to rely on the tinny speakers of your TV.

If you want the absolute top sound quality – and you have a budget that can accommodate the asking price – then the Monitor Audio R90HT1 5.1 speaker package (£1,499, around $2,169, AU$2,916) is well worth the investment, with surround sound capabilities that will help you to feel like you're inside the stadium, watching the games live.

If space – and budget – is more of a concern then a soundbar is a great choice, offering great sound quality and virtual surround sound without the nuisance of speaker wires trailing everywhere. The Denon HEOS HomeCinema soundbar and sub-woofer is worth considering – and its HEOS multi-room technology enables you to connect multiple soundbars throughout your house to play music, making it a great choice for after-match parties.

Best of all, Denon has dropped the price of the HEOS HomeCinema soundbar from £599 to £399 in the UK for four weeks to coincide with Euro 2016. If you're not in the UK then check your local AV specialists, as they may have a similar deal.

For more soundbar suggestions check out our list of the 10 best soundbars for your TV.

How to entertain your guests during Euro 2016

Having friends and family round to watch the games is a big part of the Euro 2016 experience – and you'll want to be the perfect host.

Keeping ice-cold beers (and other, less essential, beverages) nearby is pretty much a must, so having something like the Smeg FAB10LNE mini-fridge in your living room will impress your guests.

This handy mini fridge comes with an ice tray and is incredibly quiet when plugged in, so it won't distract you and your guests from the footie action.

And if people are feeling peckish then you can wow them with this Pop Up Hot Dog Toaster, which will cook the hot dogs and warm the buns for you without you having to take your eyes off the game.

To really make the experience memorable you could also deck-out your living room with Philips Hue smart bulbs. These impressive lights can automatically change colour whenever a goal is scored by your favourite team – all you need is a simple IFTTT (If This Then That) recipe.

If you fancy nipping outside for a kickabout in between Euro 2016 games the Adidas MiCoach smart ball is an interesting choice. It's not just a regular football – it has an integrated sensor inside that detects speed, spin, strike and flight path and sends the data to the miCoach smartphone app, which in turn gives you advice on how to improve your skills.

Who knows – when Euro 2020 comes around you could be out there on the pitch, instead of watching the action on your TV at home.