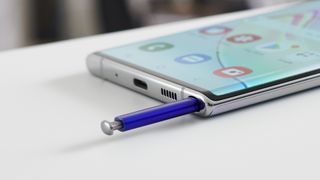 Now that curved screens on a phone are seen as indicative of premium-ness, phone companies have taken it upon themselves to create curvier and curvier displays, and it looks like Samsung could put out the most curved screen yet in the Galaxy Note 20.

This comes from a patent won by the company, and found by Patently Mobile, which shows a phone with a display that curves almost all the way round to the rear of the handset – though physical buttons are still there on the sides. Part of the patent explains how the side buttons poke through cut-outs in the glass.

Intriguingly, the sketches in the patent show three front-facing cameras and a 3.5mm headphone jack, but since the patent is only about the curved screen and protruding button, we wouldn't read too far into minor details on the imagery.

If Samsung is planning to use such a design in a smartphone, possibly for the Samsung Galaxy Note 20 devices but possibly the Galaxy S21 or Note 21 phones in 2021, it shows the company has its rivals in mind.

Several other phone companies, like Huawei with the Mate 30 Pro and Oppo with its much-publicized Waterfall Screen technology, are already working on super-curvy phones.

Samsung's phones, like the Galaxy S10 and Galaxy S20 devices, have screens that are curved but not by that much. However this patent suggests it could soon have the curviest,  and therefore potentially most premium-feeling, smartphone of all.

Saying that, patents don't always reflect the direction of a company, as they're only indicators the company is looking into the tech, not that it will actually use it, so we'd take this information with a pinch of salt for now.

Curved screens feel great to use on a smartphone though, so we'd hope Samsung is seriously considering this patent.

The Note 20 with a built-in projector makes sense

Among the fresh idea are a grip sensor that would like be akin to that in the Pixel 4 and others. There's also mention of a hologram device and projector. As much a holograms would be a killer app, we're going to go ahead and doubt that's coming soon to phones anywhere. A projector may be more reasonable.

Portable projectors have plenty of value in work settings, and the Galaxy Note family has a more professional vibe than its siblings.  And, it wouldn't be the first time we've seen a smartphone with a projector built-in. Giving a presentation on the projector built into the Note 20 could make sense especially since the S-Pen could easily work as a clicker to change slider.

The through-screen buttons feel like the tamer and more likely move from Samsung, so we're going to keep grains of salt on that projector and a pile of salt on the holograms.