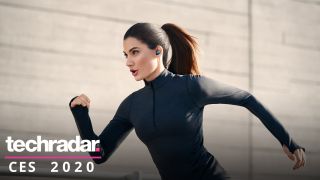 Jabra's new Elite Active 75t true wireless earbuds – launched at CES 2020 – are upgrades we've been waiting two years to see, and the early signs suggest they could have been improved in key ways over their predecessors.

There are three main elements we're pleased to see in the announcement of these new fitness-focused buds: sleeker design (nearly 25% smaller than the Elite Active 65t), improved battery life of up to 7.5 hours and a stronger focus on sound quality.

The last element, the improved audio, is especially important for sports lovers. While the richness of the midtones isn't necessarily the top thing on your mind when working out, the immersion that it offers can really help push your effort that little bit more.

One of the ways that Jabra's new Elite Active 75t true wireless earbuds achieve stronger sound - like the Elite 75t versions launched in 2019 - is the improved fit thanks to multiple ear scans being taken in the design process to find a more optimum ear shape to slip into.

This isn't really a new thing by Jabra – other brands have been doing this for years – but anything that means the earbuds are less likely to slip out is a win in our book.

Given Jabra is looking to take on the might of Apple's AirPods Pro with these new Active headphones – there's a similar sound passthrough feature that allows you to briefly hear the world around you when needed – the need to make sure the sound quality, noise isolation and fit is strong is paramount.

Pump out the power

The Jabra Elite Active 75t will also come with a charging case that can pump in 28 hours of charge before needing to be re-juiced, and (in a forthcoming software update) the new Jabra MyControls app will let you change what the button on each earbud does, giving you more control.

With four microphones to pick up voice more effectively, these earbuds are already going to be decent at activating Siri, Google Assistant or Alexa with a simple button press, but also to hold a clear conversation when dawdling down the street.

Are we excited for these sports headphones? Yes and no. There's no doubt Jabra is one of the stronger brands for audio performance, and the improved fit and sleeker design are big pros in our mind.

The Jabra Elite Active 75t earbuds release date is early in 2020, and the cost isn't extortionate at €199/$199 (around £170 / AU$320) – that's more than competitive with the AirPods Pro, although Jabra's new headphones do lack active noise cancellation, so the immersion won't be as high.

There also aren't a lot of new features on offer - the Elite Active 75t earbuds are an update on 2018's offering, and while improved in the right way, it doesn't make us want to rush out and buy them.

Jabra has also brought out new over-the-ear headphones: the new Jabra Elite 45h. These on-ear cans are dubbed to be 'best in class' (by the brand itself...) and come with a 40 hour battery life.

However, if they run out of juice completely, 15 minutes of charge will have them up and running again in no time - with 8 hours' battery life gained in that time.

The lightweight design packs two microphones for clearer voice calls - although not as strong as the four mics on the Jabra Elite Active 75t headphones.

Also using the same MySound experience as the earbuds – a feature (set to debut later in 2020) that uses a series of beeps to assess your hearing quality – these cans should offer strong sound quality... and especially when you hear the price.

At under $100 (around £75 / AU$140) they're pretty competitive on cost in a world where decent headphone cost three times that.

We'll be hunting these headphones down on the CES show floor as soon as we can though, and will be bringing you all the info on the sound quality as soon as we get it.