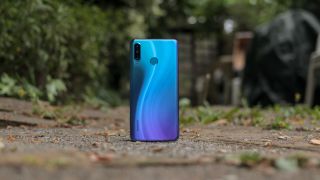 The Huawei P40 still looks set to release despite the Huawei ban, and as always it's expected to be preceded by a Lite version – and a leaked image of what's claimed to be the Huawei P40 Lite shows a device that may look a little familiar to both iPhone fans and people who know their Huawei phones.

The image comes from Slashleaks contributor and occasional leaker @RODENT950, who posted a front-and-back render of the device on Twitter.

In the leaked render you can see the front of the device, with a 'punch-hole' camera in the screen, and a quad-camera rear array on the back. This rear array is housed in a square block that looks very similar to those on the iPhone 11 and Google Pixel 4, except those two snappers each.

We don't know the specs of these cameras, or any other specs for the Huawei P40 Lite, at least not officially; however, it's possible that the full specs are already out in the open.

As the leaker points out, the Huawei P40 Lite bears more than a passing resemblance to the Huawei Nova 6 SE, a budget smartphone announced for China. The theory is that Huawei will re-brand this device as the P40 Lite for a Western release.

If this is true, then we already know all about the Huawei P40 Lite. The Nova 6 SE is set to have a 6.4-inch LCD screen, Kirin 810 chipset, and 4,200mAh battery. That iPhone 11-esque rear camera array consists of a 48MP main snapper joined with 8MP ultra-wide, 2MP macro and 2MP depth-assist cameras, with a 16MP selfie cam on the front.

That could potentially make it a very good budget device, with a price point expected around that of the Huawei P30 Lite at £329 (about $300, AU$415). While the specs are decidedly 'okay', we'll have to test the device to be sure, as we've yet to find a 2MP depth-assist camera that actually felt useful, and a 2MP macro lens doesn't sound too impressive either.

Saying that, as with other leaks we'd take this one with a pinch of salt – we'll likely know for sure in early 2020, as we'd expect the Huawei P40 range to come out then.