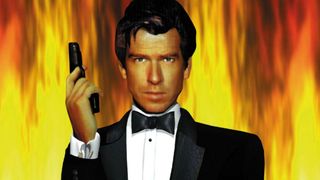 For all that Rare's doing to help push Microsoft's Kinect right now, we'd all love to see the team go back to creating the first-person shooters that earned the studio its reputation.

At a recent trip to Rare HQ, we asked studio head Craig Duncan whether we'll see the company put out another Goldeneye or Perfect Dark one day.

"If we've got an idea that makes the hardcore FPS genre do something different to what it's doing at the moment," he said.

Rare's been fully focused on Kinect Sports Rivals for the last couple of years, but that's no indicator of what will happen next, according to Duncan.

"I hear people say 'Hey, Rare just make Kinect games now'. That's true if you take a four year view, but if I take a 25 year view, that's not true at all," he said. "We've got to be nimble".

"Rare's done every genre with every control method. And actually if you think about the first games Rare made, they did things like California Games, which was actually a sports game."

Rare has changed a lot, but as the studio's shelf of proudly-displayed relics (an unopened copy of Perfect Dark, several N64s) reminded us on our visit, it's not forgotten its legacy.

Kinect Sports Rivals: is this the Xbox One game that will define Kinect?