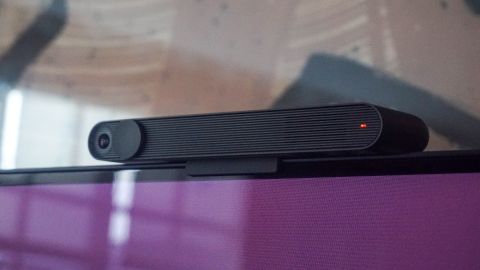 For home video calls through your TV – something with quite limited support elsewhere, especially after Skype shuttered its smart TV app – there’s certainly a reason to get the Portal TV into your living room. Low camera quality and shoddy zooming, though, holds it back from greatness; not to mention its association with an increasingly scrutinised Facebook brand.

What is the Portal TV? The latest addition to Facebook’s Portal smart speaker range is a curious one, essentially turning your home television into a expansive smart display and video call interface – rather than using the picture-frame size Portal and Portal+ models we've previously seen.

Facebook's foray into the smart home has met a mixed reception, given the prevalence of smart speakers and displays such as the Amazon Echo Show or Google Nest Hub Mac. The social media giant's reputation for mishandling user data doesn't help here, either, given the audio and video recording required for putting the Portal range to its full use. Any anyone even slightly concerned about that should not feel pressured to buy this product – especially since it caters to such a specific use, and doesn't even do it that well.

The Portal TV certainly offers something different from the competition, and whether you're comfortable having it clipped to the top of your television will depend on how you view Facebook, or trust its built-in security measures (more on this below).

But what does the Portal TV mean for your living room, or the future of video calls? Here’s everything you need in our Portal TV review.

The Portal TV differs considerably from the rest of the Portal range in its appearance, given it doesn’t ship with a screen of its own – relying instead on a television to display calls and the Portal interface.

The Portal TV has a wide, flat shape, with an eight-microphone array along the top for picking up sound from across the room. There’s a small speaker inside the Portal TV too, for when the television is off, but otherwise you’ll be using the (likely superior) TV speakers for your audio needs.

There’s a camera on the front of the device, facing into the room, with a physical camera shutter – like that on the Echo Show 5 – allowing you to feel safe that you aren’t accidentally being spied on. (Only consensual spying, thank you.)

You can also mute the audio recording feature with a button on the side, which brings up a red light to signify you're safe from prying ears – it's an odd design decision, though, as a red light usually indicates a camera being on, and doesn't read in the same way as the ring of light on an Amazon Echo speaker.

Along the back is an HDMI port, for transmitting audio and video to the TV, as well as a micro USB port for power.

But how does it actually attach to the top of the TV, you ask? There is, sensibly, no physical installation required. The Portal TV has a small fold-out stand that clips on either side of the television display, with only a couple of millimeters encroaching on the screen itself – which, given the usual height of a bezel, shouldn’t actually impact the picture.

It sits perfectly well on our TV, without any possibility of slipping. It does however need to hook over the front of the display, which may be an eyesore for some (we found hooking the Portal up to the left edge of the upper bezel was less intrusive than front-and-center).

There's a small remote, too, with pleasingly rounded edges and inputs for power, playback, volume, home, return, and voice commands. However, hitting the power button won't turn on the TV even when the Portal TV is connected to it – making the separate remote feel very cumbersome and unnecessary. (You can use the volume controls on your regular TV remote, after all).

So, how did the Portal TV actually fare? Well, you get the same Portal interface and capabilities, including integration with Alexa and the in-house Portal smart assistant.

You're unsurprisingly asked to link your Facebook account, which then allows you to call any number of your Facebook friends. One option also allows you to shuffle photos from your Facebook profile onscreen, which, given how many of them were taken on low-resolution smartphone cameras, to be viewed on mobile or desktop screens, just makes them feel out of place on the TV display – without the ability to like, comment, or interact the way you would on a computer.

One of the more unique factors of the Portal range is its tracking camera, meaning that the lens on your Portal will pan and zoom to focus on people within view, or even follow them across the room.

With the wide-pan view from the television, there’s even more scope for capturing group gatherings, or following a figure while they move around the room.

We found videos were a lot clearer when figures were up close, as the camera had trouble focusing on far-away objects, especially when they were moving. While the gestures of someone smiling and waving their hands near the lens generally held together, someone wandering across the back of the room was very blurred in motion – and this certainly isn’t an action camera, even if it will likely prove sufficient for mostly static home use.

The camera-tracking is also inconsistent, and often zooms in and out even when the figure isn't moving, making for a shifting camera pan that would interrupt the conversation as we waited for it to settle. While the underlying technology is very practical, it isn't the seamless experience you may be hoping for.

You can use the same AR effects as on the smaller Portal displays – over Facebook Messenger – even if doing them in real-time on quite a large television screen is somewhat more disconcerting than in a throwaway Instagram post on your mobile.

The video quality will also depend on your TV, too, given the 12.5MP camera – which is worse than some other Portal displays – will be upscaled to the size of the television screen. That camera quality is fine if your caller is watching through a smart display or smartphone, but we found watching on a 49-inch screen a less-than-deal experience. (Keep in mind, though, that a premium 4K TV will likely show off the footage better.)

This new addition to the Portal range offers a new and unique position among its sibling devices. For home video calls through your TV – something with quite limited support elsewhere, especially after Skype shuttered its smart TV app – there’s certainly a reason to get the Portal TV into your living room.

However, the low camera quality, inconsistent camera zooming, and limited functionality stops the Portal short from becoming a must-have smart home device. Its use-case is too specific to warrant the purchase, and not carried off with the quality it needed to impress.

That's not to mention the various concerns over privacy and handling of user data, as Facebook comes under increased scrutiny from lawmakers and public alike for its company practices. We can't shake off the feeling that Portal is meant to help the Facebook brand, but ends up being sullied by it.

For those concerned about their privacy, encrypted WhatsApp calls should help to put you at ease – somewhat – while the Portal’s settings will allow to opt out of your data being collected and utilized by Facebook. But if you’re happy making calls through your mobile as is, you probably don’t have any need of a gadget like this anyway.