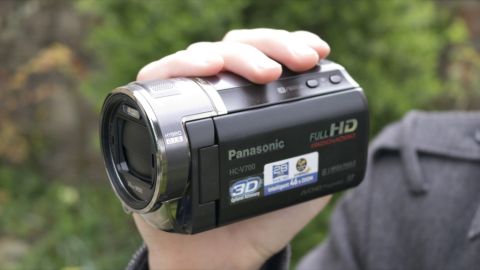 Stands out thanks to its excellent features, but we wish the image quality matched up.

The relentless march of technology inside smartphone cameras means that dedicated camcorders have started to seem less and less necessary as time goes on.

As with so many similar gadget types crushed under the boots of the iPhone, Samsung Galaxy S II and the like, the trick to carving out a useful spot in the market is to offer something the competition can't.

With an RRP of around £500 (though you can get it for less than £450 online), the Panasonic HC-V700 really needs to find a way to stand out to justify its cost.

It strikes you right from the off, though, by offering something a tiny phone never can – an absolutely massive zoom range. The HC-V700 is capable of a 46x zoom in total, with 21x of that being optical zoom, and the rest handled by Panasonic's Intelligent Zoom system.

The Intelligent Zoom is powered by Panasonic's Crystal Engine PRO imaging technology, and is designed to let you go beyond the range of the optical zoom without seeing the usual degradation associated with digital zooms.

It can't work magic, but if you go slightly over the 21x optical, it should produce something close to a purely optical image.

On top of that, the HC-V700 features Panasonic's iA wizardry, making the camera as foolproof to use as possible. You'll rarely have to worry about white balance or controlling the iris, unless you really want to – it's possible to switch back to manual control, but it's all controlled using the touchscreen, which is a pain for manual focussing.

That said, while the 1080i50 mode is recognised by most editing software, 1080p50 is right on the fringes of what's currently supported by consumer software – Apple's iMovie doesn't support it, for example. The HC-V700 comes with some PC software to make playing the videos back easy for Windows users, but Mac users face more of an uphill challenge (hint: search online for a tool called Rewrap2M4V, which turns it to an iMovie/QuickTime-friendly format).

The good news is that recording at 50 frames per second means that if you're playing back at 25fps be default, you can slow down by 50 per cent without losing quality, which is great for sports.

Also good for sports is the optical image stabilsation (OIS). Actually, that's good for everyone – the HC-V700 is small and light enough (just 270g) that it's difficult to keep your hand still while using it, so Panasonic has included five-axis correction for your hand movements, and because it's optical, it shouldn't affect the overall image quality.

The lens itself is a 28mm wide-angle unit, and it's paired with a single 1/2.33 High Sensitivity 15.3-megapixel sensor. The 'High Sensitivity' part means it features backside illumination, much like the Panasonic HX-WA10.

You'll be able to see what you're recording on the three-inch LCD monitor, which can rotate 360 degrees. There's no viewfinder, but there is a removable shoe for attaching an external video light or microphone (there's a mini-jack input for mics).

You can get a 3D lens for the HC-V700, but we didn't have it available for testing. It doesn't feature any memory of its own, but it supports SDHC and SDXC cards.