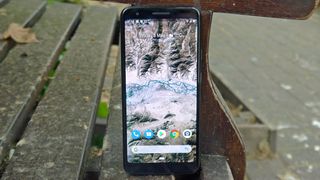 There's no doubt that the Pixel 3a (pictured above) and the Pixel 3a XL were big hits for Google in 2019 – combining decent specs, an excellent camera, and an affordable price – and now we have our first real look at what the Pixel 4a might offer.

Unofficial renderings put together by seasoned tipster @OnLeaks show Google's next budget phone from all angles, and it looks as though this could be another mid-range phone worthy of some serious consideration.

As usual with @OnLeaks renders, these aren't snaps of the actual handset – these are computer-generated graphics based on information leaked from the mobile phone supply chain, so the final design may vary.

We can see a punch-hole camera up in the top left corner of the display, plus a fingerprint sensor around the back (a feature ditched in the Pixel 4 phones), and a traditional 3.5mm audio jack for your wired headphones.

According to @OnLeaks and 91mobiles, the Pixel 4a will be sporting a 5.7-inch or 5.8-inch display, a slight increase over the Pixel 3a. The bezels on the new phone will be slightly smaller than its predecessor too.

What's not clear is what camera technology the Pixel 4a is going to be packing – remember the Pixel 3a had the same rear camera as the Pixel 3 – and we're also waiting to hear if the handset will keep the Motion Sense gesture detection of the Pixel 4.

If Google follows the same schedule as last year, then you can expect the Pixel 4a to get its official unveiling at the Google IO 2020 expo in May. We should get some news about what's coming with Android 11 at the same time.

Until then we've only got unofficial leaks and rumors to go on – but given the track record of @OnLeaks, there's a good chance that the Pixel 4a (and the Pixel 4a XL) are going to end up looking something like this.