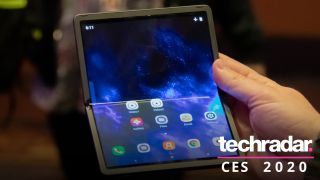 The TCL foldable phone isn't ready for prime time, but this concept may be the most important smartphone at CES 2020 because of the company's ethos.

The TCL 10 5G for under $500 sounds surprising, but it's not – it's ripped from TCL's TV playbook. The critically acclaimed TCL Roku TV 6 Series is a high-end 4KTV that competes with normally expensive Samsung, LG, and Sony TVs at a fraction of the price. This has caused TCL's rivals to either price drop their sets or make cheaper variants.

That's exactly what the TCL foldable phone can do: introduce more competition. It can offer an alternative to the Samsung Galaxy Fold, Huawei Mate X and Moto Razr, but it can also put pressure on Samsung and others to compete on price.

Here's a gallery of the TCL foldable phone as we tested it out for the first time:

It'll be a while before TCL goes foldable

It's true, the TCL foldable phone concept isn't ready to release soon. The hinge and foldable screen crease feels far from perfect, the software is buggy, and it includes no front-facing camera at the moment (though, no awkward notch cut out either). We did, however, like the prism back of the device.

The hardware that was in our hands at CES 2020 was using Qualcomm's mid-range Snapdragon 660 chipset and Android 9 Pie, so it's not on par with the company's TCL 10 series phones, which use the Snapdragon 700 chips. It's also not nearly as sleek as the Mate X due to heavy bezel and the screen size is smaller than the Galaxy Fold. But, again, this is a concept phone, and specs change and designs get refined all the time when smartphones are seen this early.

Simply, its presence at a trade show means it can usher in an age of affordable foldable phones sooner than anyone had expected. This would address one of our biggest complaints when we had in our Samsung Galaxy Fold review: it cost too much.

Even if you don't want the TCL foldable phone when it finally launches, it should still thrill you. Its presence is going to push the entire foldable phone market to compete, and that's a beautiful thing when the Galaxy Fold costs $1980 right now.