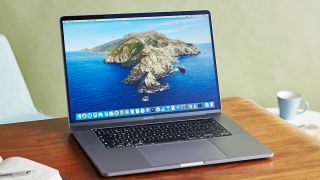 Apple only just pushed out a new MacBook Pro, but it's continuing to work on future models – and the next update could include some rather clever audio upgrades, based on a recently filed Apple patent.

The patent details an acoustic setup not unlike the one found on the Apple HomePod: it would be able to adjust the output from a MacBook Pro's on-board speakers to make it sound like it was coming from somewhere else.

These sort of "virtual acoustics" can enhance the experience of watching movies and sports games by creating a more immersive feel. It's not quite like being in the action, but it's getting there.

The system would apparently use algorithms to work out how to manipulate sounds based on the position of the person listening, the various surfaces in the room, and so on.

Similar effects could be achieved even if the listener was wearing headphones, the patent says, based on tweaks made to the audio signals being sent to the left and the right ears.

"Audio signal processing for virtual acoustics can greatly enhance a movie, a sports event, a videogame or other screen viewing experience, adding to the feeling of 'being there'," explains the patent.

While the patent focuses mostly on audio produced by loudspeakers on a laptop, this technology might not be used exclusively in future MacBook Pros – it might also come to the cheaper MacBook Air and various other Apple products.

In fact, as with any patent, it might not appear in any devices at all, at least not anytime soon. Patents do give us an idea of what companies are exploring, but there's no guarantee we'll ever see a finished product with the same tech included.